How Ghana ended the Americans' march 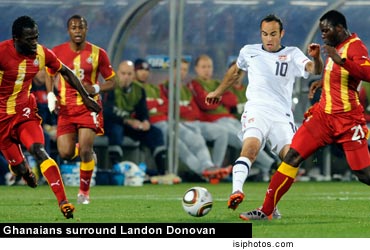 [USA-GHANA ANALYSIS] The bitter disappointment of losing to Ghana, 2-1, in the round of 16 Saturday won't be cleansed for quite a while. Nor will quickly fade the feeling of "what might have been" had the Americans been able to take their inspirational march one step further, and feed the nation with five more days of speculation and anticipation of a quarterfinal match with two-time champion Uruguay on Friday.

The Americans not only failed to win a game, they squandered a chance to win over much of a country largely indifferent to their sport except when the big show comes around every four years, a country briefly captivated by their exploits and thirsty for more.

The Ghanaians were quicker to the ball and stronger in the tackle for much of the match. They also devised a shrewd tactical plan to neutralize the connection between Landon Donovan and Steve Cherundolo that had unhinged Algeria, and several times punished a lack of pace in central defense and a narrowness of team shape that exposed the flanks.

Yet the Americans, despite falling behind in the fifth minute and laboring through a moribund first half, generated enough chances to win when they got clean runs at Ghana’s three defenders. Robbie Findley, Jozy Altidore, Clint Dempsey and Michael Bradley all had Richard Kingson’s goal in sight and well within range. Jonathan Bornstein left his corner bare on occasion, yet used his energy and skills to soften up Ghana on his side of the field.

Had their finishing been half as ruthless as that of Kevin Prince Boatang and Asamoah Gyan, who drilled home shots on two of his searing runs through the middle, the undressing of Ricardo Clark that prompted the first goal would have been but a sidelight. Or, had keeper Kingson not been in sparkling form, a long driven ball that Gyan punched home for the second goal less than three minutes into overtime might never had happened.

Criticized for over-use of long balls in this competition, the U.S. produced chances with balls over the back line. Kingson charged out of his goal to tackle away a ball from Altidore with a superb tackle and stopped a shot on another occasion. A third ball, played centrally, engaged Altidore in a furious wrestling match with centerback John Pantsil, who jarred Altidore sufficiently that his scuffed shot rolled a yard wide. Kingson also got his fists to several Donovan dead balls and Ghana’s robust marking snuffed other serves.

Had those balls gone to Robbie Findley rather than Altidore, perhaps his speed would have been decisive. Altidore, obviously weary and dull from a superb showing against Algeria just three days earlier, lost his legs in the second half and Herculez Gomez replaced him for the extra periods.

In more than one sense, this defeat reeked of fluffed opportunities. A soaring balloon of momentum has burst, and instead of a work week full of froth and frenzy – and not just on ESPN – there come discussions of tactical and personnel decisions made by Coach Bob Bradley, good plays and breakdowns at critical moments, and eventually, what happens next.

Clark may have more speed and range than Maurice Edu, but against tough, fast opponents, more bite and muscle than Clark provides was needed. Findley may be the fastest U.S. forward but he looked pedestrian when matched with Ghana’s three burners in the back. And in their previous World Cup stints Clark and Findley had done little to merit recalls in such a critical game, in which their absence and lack of game sharpness would be evident.

Bradley didn’t have viable options. Both Gomez and Edson Buddle had worked hard but squandered their chances as well. Altidore didn’t have the energy to work the flanks as he had in the group phase, but if Findley’s speed was supposed to exploit a different attacking stance, it seldom worked.

To thwart Cherundolo’s attacking impetus from his right-back position, Ghana deployed either Andre Ayew or Kevin-Prince Boateng to monitor him and also stay close to Donovan if he was in the area. Though Ghana’s formation and shape changed, it often spread out five players in midfield, and by cutting off Cherundolo’s passing lanes into the middle it shut off lanes by which he could join in combination play. It also surrounded Clark/Edu and Bradley with three players, at least until the Americans sorted out things at halftime and Findley left in favor of Benny Feilhaber, with Dempsey moving up top.

Edu’s presence solidified the middle, and Feilhaber’s mobility and touch opened up Ghana’s midfield trap, and also gave some relief to Dempsey, hammered by a Ghanaian just about every time he touched the ball. Feilhaber slid into the middle to offset Ghana’s numbers, and from that slot he played a ball forward that Donovan touched to Dempsey, whose snaky dribble prompted Jonathan Mensah to bowl him over.

Donovan took the penalty and it nicked the inside of the post, the first time in the tournament a shot to the woodwork had turned out favorably for the U.S. Riding the momentum of a goal, the Americans gained strength in midfield and got their shots but couldn’t solve the quick and agile Kingson.

Both of Ghana’s goals exploited central breakdowns. On the first one, Michael Bradley played a short ball to Clark, and then looped behind him, perhaps expecting a return pass. Instead, he had no chance to intervene when Kwando Asamoah stood up Clark in the center circle, and released Boateng to race toward goal. He deked Jay DeMerit before firing a low shot that caught Tim Howard a foot or so too far from his near post.

Less than three minutes into overtime, Ayew’s long clearance down the middle of the field turned into a three-horse race. Gyan sprinted for the ball between DeMerit and Carlos Bocanegra, who had been cautioned late in the second half and didn’t risk a tackle or shoulder charge. Gyan’s speed won the duel and he fired a blistering shot that Howard’s desperate stab failed to deflect.

Ghana held on for the last 27 minutes as the frustrated, tired Americans conjured up a few decent chances. Bradley shot wide, and in the final minute, Kingson punched out a Donovan corner yet again. A tough loss in a winnable game with opportunity beckoning will linger long in the memory.