[OBITUARY] The great Portuguese star Eusebio, who died of heart failure on Sunday at the age of 71, was arguably the best player of his generation after Pele. He led Benfica to the 1962 European Cup title, won the Ballon d'Or as the European Player of the Year in 1965 and scored nine goals in leading Portugal to third place at the 1966 World Cup in England. Eusebio, one of only two African-born players to win the Ballon d'Or, was like Pele a trailblazer, finishing his career in North America, though he never made the kind of money Pele did.

Eusebio, who was born in Mozambique, then a Portuguese province, came to the NASL in 1975 to play for the Boston Minutemen. By then, he had bad knees but he played four years in North America, the first three in the NASL with Boston, Toronto and Las Vegas and the final season, in 1978, with the New Jersey Americans of the ASL. 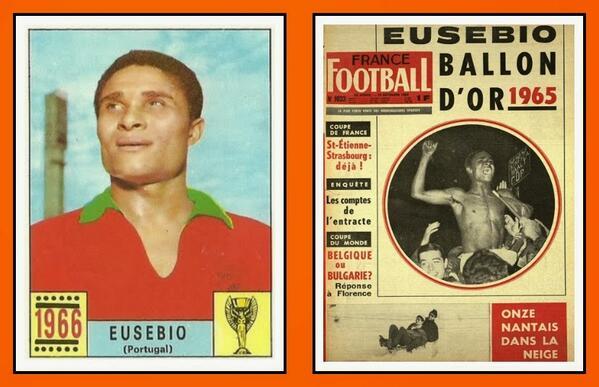 New England being home to a huge Portuguese population, it was only natural Eusebio begin his NASL career in Boston. His arrival coincided with that of Pele to the New York Cosmos, and they played against each other in one of great games of NASL lore in June 1975. Boston University's Nickerson Field was home to the Minutemen -- one of six venues they played at in their three tumultuous seasons in the league -- and it only seated 14,000, but more than 20,000 fans showed up with tickets to see Eusebio and Pele. Many of the lined the sidelines and applauded as Eusebio put Boston ahead with a free kick. But when a Pele equalizer was called off for a foul, the fans invaded the field, mobbing the Brazilian star, who was rushed off the field. Without Pele, who was treated for injuries, the Cosmos eventually lost the game in a shootout, but they successfully protested, forcing a replay.

With a team that included former Portugal and Benfica teammates Tony Simoes (now an assistant coach on Iran's World Cup team), Shep Messing, Ade Coker and Wolfgang Suhnholz, the Minutemen won their division title in 1975 but ran out of money by the middle of the next season, forcing the mid-season departure of Eusebio and the others.

Eusebio landed in Toronto, earning $1,000 a game for the Metros, another cash-strapped team that was rescued by local club Toronto Croatia, which renamed the team Toronto Metros-Croatia, much to the consternation of the NASL, which didn't recognize the name.

The coach of the Metros-Croatia, Ivan Markovic, apparently didn't recognize Eusebio either, benching him in a dispute over who should take free kicks and getting fired for his efforts. “At Benfica, Eusebio takes kicks. At Portugal, Eusebio takes kicks. And at Toronto, Joe Schmoe takes kicks?” Eusebio recalled upon his return to Toronto in 2010 on a promotional tour.

The Toronto Star described Eusebio as the Bobby Orr of soccer, noting the parallels in their careers. “Both possess left knees resembling the Rocky Mountains -- including all the lumps and crevices.”

As Jamie Bradburn tells in his story on the Metros-Croatia, they were so poor they couldn't afford to send a doctor with the team to the 1976 Soccer Bowl against Minnesota in Seattle, and the local Sounders doctor was brought in to care for the players.

Eusebio needed to have a shot of Novocaine to treat his ankle, but he managed to score the winning goal for the Metros-Croatia in their 3-0 win over the Kicks and played the entire game. “It lasted all game,” Dr. Marty Kushner told Bradburn, “so I must have given him a good shot.”

The great Alfredo Di Stefano said Eusebio, who had been in and out of the hospital over the past year, was for him the greatest player of all time. The "Pantera Negra" ("Black Panther") is perhaps best remembered for his four goals that brought Portugal back from a 3-0 deficit against North Korea in its epic 5-3 win in the 1966 World Cup quarterfinals but he is also considered one of the great ambassadors of soccer. His gesture of coming over and applauding Alex Stepney (another future NASL player) after the Manchester United keeper stopped his shot in the 1968 European Cup final is considered one of the great displays of sportsmanship in a major soccer final.

Though he only had a brief stop in Boston, he is still remembered by the Portuguese community there. A statue in Eusebio's honor was erected outside the new Gillette Stadium in Foxboro, Mass.