[AMERICANS ABROAD] It was a grim Saturday, to say the least, for U.S. World Cup hopefuls playing in Europe. Timmy Chandler had to be taken to the hospital with a knee injury (meniscus tear) suffered in Nuremberg's Frankisch-Bayerisches derby with German champion Bayern Munich.

Of the 14 U.S. World Cup hopefuls whose clubs were in action on Saturday afternoon, just seven played. Of the four who went the distance, all were playing at home, but no one won. Brad Guzan (Aston Villa) and Jozy Altidore (Sunderland) both lost.

Nuremberg said Chandler was expected to be out 8-10 weeks. The injury, which came in the 8th minute of his 100th Bundesliga game, was a huge blow as he had been playing very well to draw the attention of U.S. national team Jurgen Klinsmann, in whose doghouse he's been for much of the last year. It was a rough day for Nuremberg, which lost young striker David Ginczek for six weeks with an injury. 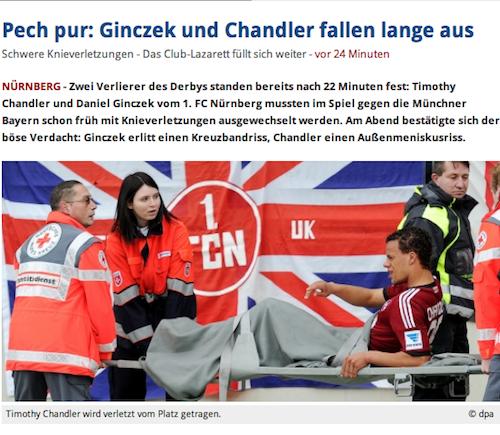 Unable to play with calf injuries were Oguchi Onyewu (who had been also been making a late bid since his move to Sheffield Wednesday and Aron Johannsson (injured Tuesday in the same game he scored his 21st goal for AZ). Once again, Sacha Kljestan did not get off the bench at Anderlecht, where he has made one league appearance in the last two months

German-American Andrew Wooten scored on his first touch with his new club to give FSV Frankfurt a 2-1 win at Bochum as the German Bundesliga 2 resumed Friday night after the winter break. The goal was Wooten's 10th in the second division in 40 games.