What Morena taught me about being a better footballer

[THE PITCH: Blog 2] I recently read a New York Times self-help article by Amy Sutherland called What Shamu Taught Me About a Happy Marriage, and, as my family had just adopted a puppy, I figured I would employ some of her advice as a refresher course on reward-based training. The twist of the article is that Sutherland begins to use these animal training techniques on her most important human relationship, namely her husband … I thought about that saying psychologists love … our most important relationship is the one we have with ourselves. So the real twist, of course, is that I decided to apply these very same animal techniques to myself … as a puppy … err… player in training. I’m quite familiar with the idea of being my own manager, coach, and cheerleader, so why not add personal trainer?

Our puppy Morena was named after a cow ... a brown cow that my family had milked while visiting a farm in Ecuador. I was actually the first “Mo” of the house, but my childhood nickname lacks any direct correlation … or any rhyme or reason for that matter. But hey, at least I wasn’t named after a cow. Morena is adorable with her sleek, silky honey-colored coat, oversized ears, and white dipped paws. As for me, I get my paws … err … nails dipped weekly and I have to take my coat to the dry cleaners to keep it sleek. (After seeing the last bill, I am really considering licking it clean myself). Appearances aside, the main thing that Morena and I have in common is that right now we are both in training. 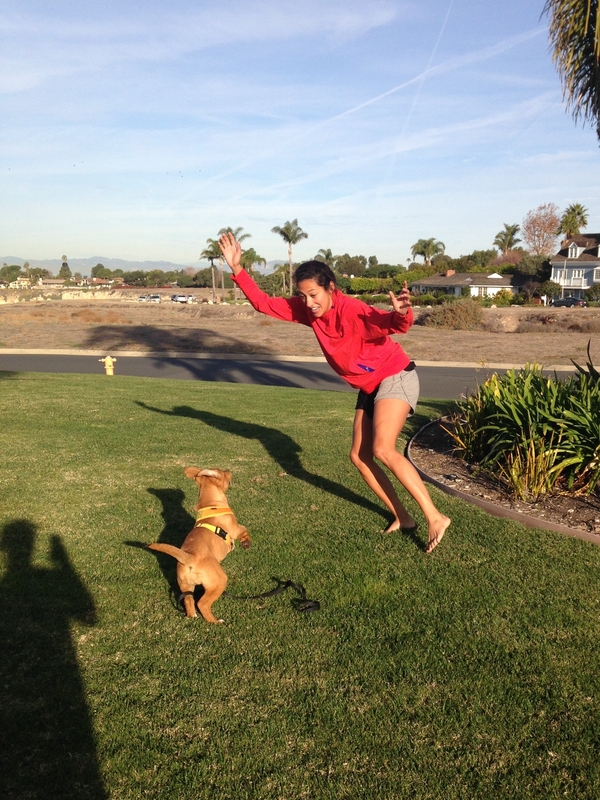 Unlike me, Morena is a social butterfly. She’s clever and expressive. People and dogs love meeting her as much as she loves meeting … and jumping on them. Walking with Morena is probably the most social part of my day; she strolls confidently through the neighborhood, hips swerving, as she introduces me to her pals. Watching her go, I sometimes wonder what life would be like if I jumped up and down, shook my butt, and kissed all over every stranger that greeted me … I digress. Jumping is bad. And this habit of hers quickly jumped to the top of the “eliminate this behavior” list!

So, how do you begin to stop a dog’s bad behavior? According to WSTMAHM, you simply ignore it. Simple? Hmmm … The entertainment industry has a saying, “All press is good press.” Well in the world of puppy/husband/footballer training … it seems that all attention is good attention. That means that every time I acknowledge a behavior, whether positively or negatively, I encourage it. To Morena, shouting, “No!” and “Stop!” is likely to promote the errant behavior because the desired affect is the attention. Easier said than done, Sutherland! Especially when it came to training myself. Morena jumps on people. I miss shots. Hey, at least I haven’t knocked over any toddlers…well, not lately! Self-chastising had been an integral part of my game for a long time. And as far as relationships go … I found the words, “Are you kidding Christen!” a real icebreaker.

So, when Morena jumps on me, I make it clear that, although incredibly adorable, I am ignoring her by physically turning my back to her and continuing whatever I am doing. On the field, if I shoot the ball off target, I turn my back to get quickly into position and continuing playing, wasting no time or attention on the mistake. Even though I’ve ignored the missed shot and turned my attention to the game, “older dog” that I am … I find it difficult to stop the peanut gallery in my head. “Bad girl!”

Sutherland also suggests that instead of training the subject NOT to do an incompatible behavior, like, in the case of Morena, biting, we should substitute something else. Instead of yelling at her for biting our hands, we offer her a chew toy as an alternative and whenever she chews on her toy we praise and reward her.

As for me, instead of telling myself NOT to miss … duh! I started saying: SCORE! In high-pressure situations like sports, the brain often does not have time to process complete phrases. In the worst of cases, the actual words can be lost and the only understood message comes from intonation … not unlike speaking to a dog … just sayin’. Studies show that this type of error-avoidant thinking has negative affects on performance. I’ve experienced this phenomenon first hand when a teammate, in the heat of a battle, screams, “RELAX!!!!!!!!” The effect is usually not relaxing. More often, under duress, the brain narrows in on the nucleus while missing all the modifiers, namely, negation. So, if you are telling yourself not to kick the ball over the goal, there’s a good chance that you will only absorb “kick it over.”

Both Morena and I are very much a work in progress. But throughout this process, I started to see how some of her natural behaviors could be really an advantage in any athlete’s training. For example, she talks with her body, and as I’ve said before, body language is paramount in team sports.  Tail tucked? Out of the play. Tail up? “Just give me the Damn ball, Keyshawn!” At the dog park, Morena really gets into her tackles. She is relentless in her pursuit … chasing down the small dogs and pestering the big ones.

Most of all, Morena listens to her body. Right now, the offseason for Damallsvenskan is the time in my life that I have the most control over my fitness regimen. And when I have control, I tend to overdo it. On the other hand, I’ve had to smile more than a few times when baby Mo ever so dramatically throws herself down on the floor, as if to say, “Enough!” At just four months old, she listens to her body and refuses to continue doing something she enjoys when she’s exhausted. At 25, I still have not mastered this skill. How can I get in my lift, extra shots, and rehab if I took a nap? How can I play, write, and spend time with my friends if I stopped when my body was tired? Well, what our little Morena knows is that for quality play, you need your rest! You might be thinking: That’s Impressive … but I call it: Best In Show!
african nations cup, alianza de futbol
2 comments about "What Morena taught me about being a better footballer".
Read more comments >
Next story loading