[THE PITCH: Blog 4] It's the morning of the semifinal and I've woken up with knots in my stomach. I can hardly remember the last time I was actually nervous for a game, but I'm relieved I was able to sleep through the night. The first leg of this semifinal ended 0­-0 in Birmingham, and now we're just 90 minutes and one goal away from a dream final in Lisbon. Yesterday reporters asked me, "Do you feel pressure as the favorite?" "Yes." "How does it make you feel that if you don't win, you pack of your bags and leave?" "Stressed." "Do you believe that this team can really win?" "Absolutely, but a football is round, and if I've learned anything this year it is that not everything is in my control..." "What has Tony told the team?" "Find a way..."
...
I was told that, in his first meeting as head coach of Tyresö FF in July 2012, Tony Gustavsson's words were about, "…the road to Lisbon." Taking the team halfway through the season, Tony led the Yellow and Red to a Damallsvenskan title, and with it clinched a place in the subsequent Champions League. During the winter window, he signed just two additional players, and I was one of them.

In an interview he said that I was “the perfect complement” to one of the most talented midfield lines in the game. After playing a year under Törbjorn Nilsson at KGFC (see Oh Captain My Captain!), I had fine-­tuned the nuances of running behind a backline, which Tony hoped would add a new dimension to his possession-style team.

In my first full team meeting in 2013, Tony, smiling, introduced "the fabulous four"­ -- his nickname for the four titles we were gunning for that season: Super Cup, Swedish Cup, Damallsvenskan, Champions League. The expectations were high, and our hopes even higher. TheFab4 came to an abrupt end even before it began. In our first official match of the season, we lost to my old club KGFC in penalties of the SuperCup final. Tony brought the team together after the penalty shootout. He wanted us to keep our heads up and feet moving forward. It was in that moment that I first noticed what makes Tony stand out as a coach. He was truly a part of the team. Instead of being disappointed or angry at us, he felt the game, our anger, and our disappointment with us. The loss marked the beginning of a season that would take us, as a team, through "Hell and high water."

It was difficult coming on to a team that had just won the title. It seemed there was nowhere to go but down. At the first sign of trouble I wondered if my teammates were thinking that they were better off without me. I would play alongside some of the biggest names and games in football. I awkwardly struggled to fit into yet another unfamiliar system and a team that rarely played balls into the space behind (where I had trained hard to become most comfortable finding them). I felt my team was frustrated and unable to understand me. Our 2013 Damallsvenskan campaign seemed plagued by setbacks. The team rarely had the space to play Tony's preferred TikiTaka style. Against Tyresö, teams had learned how to sit in­ -- what in Sweden they refer to as "parking the bus." We underperformed, we dropped points, and in the end we hardly challenged Malmö for the title. 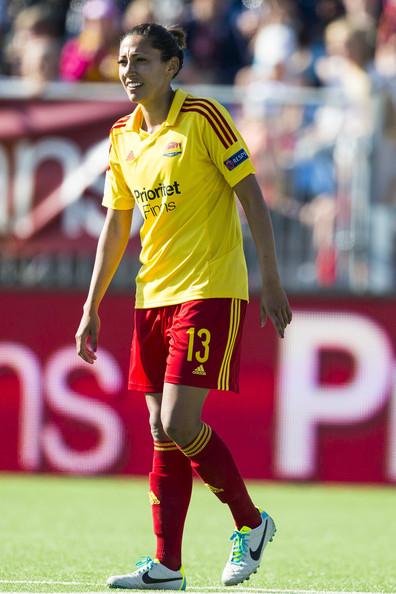 I remember a practice at the beginning of last year when I woke up feeling a little dizzy. I went through the motions at training, and instead of my usual post-practice shooting regimen, I rushed off the field to rest and rehydrate. Tony met me in the parking lot after the training. He had noticed that something was off and wanted to know if there was something he could do to help me through days like these. I told him that I felt a little off, physically. I saw him checking my face, wondering if I was the type of player to make excuses.

Trust is THE quality in a great football team. In trust, a team finds the patience, the strength, the quality, and the magic. The team creates chances and must trust the forward to finish them. For me, no trust means no chances, which means no confidence. As we struggled through that Damallsvenskan season, I worried that I was not earning the trust of my teammates and of Tony. This insecurity stayed with me through countless trainings where we worked tirelessly at wing play, and I felt completely unnoticed and uninvolved standing alone in the middle of the park. After dropping the SuperCup and the league title, it was clear all of our eggs were purple and white (CL colors) and sitting in one basket. Big wins against PSG and Fortuna in the first two rounds of Champions League restored some faith and lifted our spirits.

When I arrived back to preseason this winter, I had set a clear goal to help build trust within this team. I thought we were the best team in the world, but we hadn't played like it ... Maybe we really didn't know it or believe it. I wondered how I could give our team confidence and earn their trust during preseason without any official games to prove ourselves and myself to them? I’ve found that trust, respect, and confidence are built from the bottom up, brick by brick ... ball by ball. It is a culmination of subtle nods of encouragement and high fives and smiles. The outside world had seen us fail­, losing the title. They wrote, "How can a team that couldn't win their league win Champions? But only we, our team, had seen the brilliant save our goalkeeper made in 5v5. And many of our clever combination plays are unknown to the outside world buried under the preseason snow of a remote and small, Swedish suburb.

Tackle after tackle, shot after shot, through turmoil and chaos, media drama and bankruptcy, we showed each other what we were made of while nobody else was watching. Sure, scoring a big goal in a big game can help you gain the attention of the world. But fame can be fleeting and forgetful. You're only as good as your last game. Trust, however, built slowly within a team does not waver with a mistake or a missed chance.

In the final training before our home leg against Birmingham, I had a great practice. One of those trainings where everything you touch ends up in the back of the net and you play with freedom and power and fearlessness. Instead of my usual post-practice shooting regimen, I rushed off the field to rest and rehydrate ... After all, tomorrow was the big game! Once again, Tony met me in the parking lot. A year’s time had passed since our last encounter here, and I wondered if he, too, remembered it. This time, there was no quizzical look on his face. And no words were exchanged; just a smile and a pat on the back before we got in our cars and drove away...

I feel the trust we have built as a team every day when Tony smiles at us. He's always smiling, and I mean always. He screams at us during games and has to deliver us the worst news about the clubs financial situation, but he still ends his words with a flash of teeth. The sparkle of hope in his eyes never seems to fade. And lately it's grown bigger and brighter as we creep closer to our semifinal.
...
Tony shows up to the locker room dressed "to the nines." The team requested that he wear a game-day suit to our home semifinal leg, so he wears it with a smile. When he walks in, he bubbles over with excitement. We all smile back. He has told us so many times before that he wishes he could be out there on the field playing and battling with us, but he doesn't say it today. Like always, his facial expression says it all: your best is good enough! But this time, we already know!

0': Birmingham made this a battle on and off the field. After our first leg tie, they mocked us in the media, announcing fake injuries and even saying, "Where was Marta? In Chelsea Weston's back pocket." As the kickoff whistle blew, the war began. The last image in my head was the ball's logo: Final Lisbon 2014.

25': Every scoreless minute that passed was a minute lost for us and won by them. In high-stake games like this, missed chances have the opposite effect than normal for the dominating team. Instead of providing energy (since we are knocking on the door), the evidence works adversely to make it seem that the odds are stacked against you. Still, we play on.

45': Our halftime locker room is never loud and energetic with HBO pump up talks ... or yelling ... or fist pumps. We rest and we talk tactics. I, however, was deep in thoughts of a mathematical nature, "135' have gone by and still scoreless."

50': Hand ball in the box: penalty kick! As Marta steps up to take it, she's accompanied by Birmingham's captain whispering sweet nothings in her ear like: "You're gonna choke! You think you're the best player in the world?" As the ball sailed over the crossbar the stadium was silent.

60': Our midfielder Vero Boquete picks up the ball in the center of the pitch and turns. She's been riddled with injury through most of preseason and struggled to show her true colors. As soon as she turns toward the goal, I know she's there. As I watch her dribble up the field, I think, nobody in the world wants to win more than us. She lets one rip and it shakes the entire goal as it bounces off the crossbar. The mental clock in my head tells me that we have 10-15 minutes to score before the game will turn into utter chaos. We play on ...

70': Our 20-year-old, 5-foot midfielder Malin Diaz gets the ball. No matter how many times she does one of her signature turns, it never ceases to amaze me how quickly she can change direction. She slips a ball past two final defenders, and the rest is a blur to me. Right foot, left foot and I watch the ball slow roll past the goalkeeper into the far post.

91': We are winning 2-0 and I feel so powerful as we pass the ball around Birmingham with control and freedom. I decide to give it one last max sprint and take the ball charging at midfield. I find Marta and she finds me back. 1-2. The first and only English word from her mouth on the field escapes: "Wait." As she sprints passed the back line, I pass her the ball behind the defense, and it's over. When we huddle around her in celebration, she's crying. She looks at me and says, "Thank you." And that is the proudest moment of my soccer career. 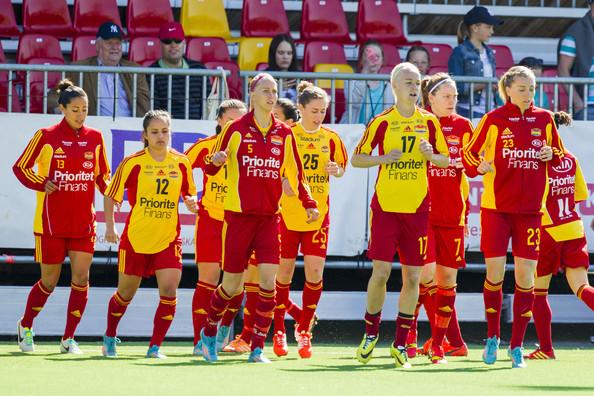