[WORLD CUP 2014] As Brazilian police set out to quell a new wave of anti-World Cup protests on Thursday, for the moment smaller than those that overshadowed the 2013 Confederations Cup, reports have been coming out of Brazil of just what kind of anti-riot specialists Brazil has been training for the World Cup and what kind of weapons they'll be amassing.

One of the big winners in Brazil's World Cup efforts will be weapons suppliers. The newspaper Globo outlined the weapons security forces will have at their disposal. In the last year, police and security forces have purchased 270,000 non-lethal grenades -- 95,000 by police in the state of Minas Gerais alone -- and projectiles for releasing tear gas and pepper spray and 263,088 rounds of rubber bullets of various types and models. 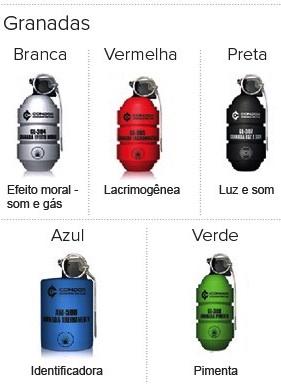 Globo reported that police were particularly interested in high concentrations of pepper that could applied in aerosol spray or foam gel at medium and short distances.

"RoboCop" equipment weighing 22 pounds have been given out to special forces. The outfit includes a helmet and vest that protects the back, chest and shoulders. There are plastic shin pads and a pepper spray mask. The weapons belt will contain a .40-caliber pistol, stun gun, handcuffs and baton.

ADIDAS VS. NIKE. One of the sideshows to every World Cup is the sponsor war that takes place between official FIFA sponsors and their competitors that attempt the ambush the tournament.

Bloomberg Businessweek reports Nike, the largest sportswear company in the world, is closing in on adidas in terms of soccer revenues -- $2.4 billion in soccer revenue for adidas in 2013 and $1.9 billion for Nike -- which gives them 70 percent of the global market for soccer.

Bloomberg Businessweek went so far as to count the goals scored by players in Europe's top four leagues --EPL, Lia Liga, Serie A and Bundesliga -- and the shoes they were wearing:

Down on the Farm ...
The most visible image of adidas' World Cup sponsorship is the Brazuca soccer ball that will be used during the tournament. U.S. Soccer, of course, has had a deal with Nike for many years, but to get ready for the World Cup, the U.S. national team is using adidas balls, beginning with the first day of training Wednesday at Stanford University.
business, world cup 2014
Next story loading