What U.S victory means for Sunday's rumble in the jungle

[BRAZIL 2014] The USA's victory over Ghana, coupled with the stunning result in the Portugal-Germany game, opens the door to what few thought possible beforehand. The Americans control their own destiny and could be moving on to the round of 16 as soon as Sunday. For what Monday's results in Natal and Salvador mean and updates on the U.S. (and Portuguese) injuries.

The USA moves on to Manaus for its rumble in the jungle with Portugal, coming off a 4-0 loss to Germany. By then, it will know the result of Germany-Ghana, which will be played in Fortaleza on Saturday.

Germany will be heavily favored against Ghana, which will need to regroup amid reports late Monday night in the Ghanaian press that there was unhappiness among the Black Star veterans -- notably Kevin-Price Boateng -- about Coach Kwesi Appiah's lineup choices. 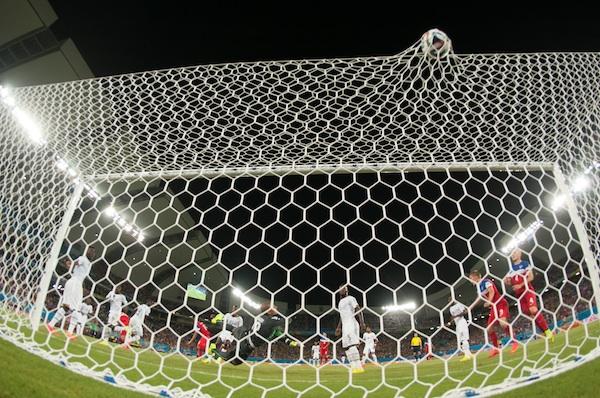 Assuming a Germany win on Saturday, the USA will clinch a berth in the round of 16 with a win. It will also eliminate the Black Stars with a tie and put themselves in very good position to advance. That's where Portugal's 4-0 loss to Germany looms so large.

A tie in Manaus means Portugal would have to overcome a five-goal differential on the final day of Group G on June 26 when the USA plays Germany in Recife and Portugal meets Ghana in Recife. Impossible? No. Unlikely? Yes.

And a U.S. loss to Portugal? Depending on the margin of victory -- less than three goals -- the USA would still go into the final day with an edge over Portugal on goal difference but both teams would likely need a result to advance.

(In 2002, the USA and Portugal were in the same group. They both lost on the final of group play yet the USA still advanced.)

USA. During Monday night's game, U.S. Soccer stated that Jozy Altidore had strained his left hamstring and would have a scan on Tuesday to determine the extent of the injury. Coach Jurgen Klinsmann was optimistic that Altidore will return, but he could not put a timetable on it.

"It was really tough for me,” Altidore said of the injury after the game. “I was crushed. I knew right away I couldn’t continue.”

Matt Besler was taken off to start the second half after his hamstring tightened and it did not loosen up despite the work of the U.S. staff at the break. He'll also undergo tests after the USA gets back to Sao Paulo, but Klinsmann was not concerned. “With Matt, it’s no problem,” he said after the game.

There was no discussion about whether Clint Dempsey had broken his nose on John Boye's wild kick in the first half. “I just had trouble breathing,” Dempsey said. “I was coughing up blood out there. I did get a little bit tired."

And was no question of whether he'll be available on Sunday against Portugal. “Clint has to shake it off with his nose,” Klinsmann said. “I broke mine three or four times, it’s all right. Give him three or four days.”

PORTUGAL. The news out of Portuguese camp was definitive. Team doctor Henrique Jones reported that Fabio Coentrao, who went off with a groin injury, and striker Hugo Almeida, who left the Germany in the 28th minute with a leg injury, will both be sidelined at least 10 days.

And that's on top of Pepe, who will sit out Sunday's game (if not more) after being red-carded for head-butting Thomas Mueller. That means three Portuguese starters will be out on Sunday.