[BRAZIL 2014] The USA heads into the round of 16 against Belgium with a lot going against it. It was worn down entering the final group game and rarely threatened against Germany, losing, 1-0, to extend its winless streak against European teams at the World Cup to eight games. But it can look to the example of the 2002 U.S. team that also barely survived the first round but made major lineup changes and went out and beat Mexico in the round of 16.

1. Get help for Dempsey. Since the World Cup has started, the USA has been outshot, 55-27. You're not going to survive long if you're getting outshot by a 2-1 margin. Jozy Altidore has been declared healthy and available for Tuesday's game, but how much he plays remains to seen. It would be a shock if he started.

So far Jurgen Klinsmann has shown no confidence in Aron Johannsson and Chris Wondolowski to get the USA a goal. The only times he's used them was when the USA had the lead -- Johannsson for Altidore midway through the first half of the Ghana game and Wondo for Clint Dempsey in the dying minutes of the Portugal game. Klinsmann didn't even use a third sub at the end of the Germany game -- though the only thing the USA had to avoid in Recife was not getting clobbered once Portugal went ahead.

Dempsey needs someone to play off and be able to use his great instincts to find seams in the opposition backline. As the fifth and most advanced midfielder, Michael Bradley should fill that role, but he has been so stretched with his defensive responsibilities that he hasn't been a big help.

Other options? The player who mostly closely fits the role of a second forward Klinsmann needs is Eddie Johnson of 2013, but Klinsmann showed no confidence in him, not even including him in the short list of 30 players. 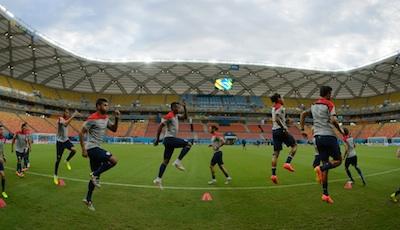 2. Get around Belgian backline. The Fabian Johnson we saw storming down the right wing in the send-off series and in the first two World Cup games disappeared against Germany. There were multiple reasons for his quiet game, including fatigue. But the deep line the USA played and its inability to hold any possession in midfield created few opportunities for Johnson to attack.

On the theory that the best defense is a good offense, the response to Portugal's threat down the wings with Cristiano Ronaldo and Nani was to have Johnson bomb down the wings and bring on DeAndre Yedlin for the last 20 minutes.

That could be the same against Belgium with Eden Hazard, Kevin De Bruyne and Dries Mertens. One of the options Klinsmann will probably be considering seriously is to start Yedlin. Johnson and Yedlin together would pose the greatest threat to attack Belgium's weak link, left back Jan Vertonghen.

3. Somehow find a second wind. The USA was gassed against Germany, and a team like the USA, not very technical, will inevitably fall apart if it can't take the game to its opponent.

In 2002, the single most important reason for the USA's success was its depth -- and Bruce Arena's willingness to use it. Very similar to the 2014 team, the 2002 U.S. team ran out of gas in its third game, losing to Poland, 3-1, and advancing through the back door when it got help in the other match on the final day of group play.

Instead of sticking with the same team for the round of 16, Arena made four changes in the starting lineup -- two players, Gregg Berhalter and Josh Wolff, had not even played in the group stage -- and threw in a new formation -- replacing the 4-4-2 with a 3-5-2 -- for the game against Mexico in Jeonju.

Is there a Berhalter or Wolff on the 2014 roster? Three field players have yet to play in 2014: Timmy Chandler, Julian Green and Mix Diskerud.
men's national team, world cup 2014
12 comments about "Three keys to USA-Belgium".
Read more comments >
Next story loading