“He's a coward and a criminal,” says Paolo Roberto, at the Jato Bar in Flamengo, Rio de Janeiro.

“A murderer, not a soccer player,” says Valmir, getting increasingly riled up as he stands on the sand of Flamengo Beach waiting to join a beach soccer game. “If Luis Suarez gets a nine-game suspension, that son of a whore deserves many more games.”

They are talking about Colombian defender Juan Camilo Zuniga, who late in Los Cafeteros’ 2-1 loss to Brazil broke a vertebra in Neymar’s back.

“It was intentional, no doubt,” says Paolo Roberto’s friend Zeir. “Yes, the Brazilians fouled a lot in that game, but they played hard, not dirty.”

If you ask Brazilians, especially children, to name their favorite player, the answer is always Neymar.

Ever since he made his 2010 debut for the Selecao, at age 18, scoring in a 2-0 win over the USA in a Giants Stadium friendly, Neymar has been Brazil’s latest “next Pele.” And he has not disappointed. Neymar’s four goals carried Brazil in group play. He also buried the Brazil’s deciding spot kick in the shootout against Chile.

Turn on the television in Brazil, and you won’t have to wait long to see a replay of the incident. One station showed 12 replays in a row, from different angles and speeds, including super slow-motion, showing precisely how Zuniga’s knee hits Neymar. 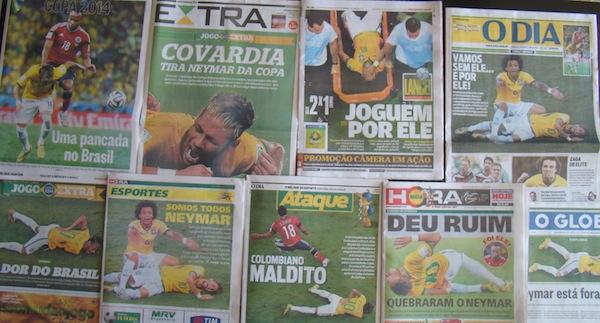 “Stabbed in the back,” is the Hora Meia headline. O Dia’s front-page headline next to a photo of Neymar on the ground clutching his back and Zuniga still in the air reads: “Damn Colombian.”

O Globo has eight three-by-three inch photos of the foul that could be turned into a flipbook. It also produced a detailed diagram of Neymar’s spine and drawings of the brace he’ll be wearing during recovery.

“The Pain of Brazil,” offers Jogo Extra with a close-up shot of Neymar screaming in agony. “A Criminal Tackle” … “A Blow to Brazil” … “Cowardly act ends Neymar’s World Cup” are other headlines.

That the incident will rally the Selecao is also a consensus (“We will go on without him, We will go on for him” -- O Dia).” Maybe it will. Brazil is not short on attacking talent. Perhaps the skillful dribbler Oscar will now step out Neymar’s shadow after fairly subdued performances so far. Other players who could help compensate for Neymar’s absence are Bernard, Willian, Ramires and Hernanes.

“Neymar is great,” says 8-year-old Gabriel as we interrupt his play on the beach with his buddy Samuel. “It makes me sad that he got hurt. But Brazil will still win the World Cup.”