The latest edition of our “When They Were Children” series provides a glimpse into the youth years of World Cup final hero Mario Goetze, who scored the goal that gave Germany its fourth world championship.

Mario Goetze is the middle child of Jurgen and Astrid, whose three boys enjoyed soccer so much that they built a small field for them in the cellar of their Dortmund home. They played with a plastic ball on 5- by 6-yard patch of artificial grass with mini-goals.

Grandfather Willi said, “A day without a ball didn’t exist for Mario. When the family lived in America, he tried baseball and some other sports, but main thing was he was always with a ball.”

The Goetzes lived nearly two years in Houston, where Jurgen had a research fellowship with Rice University’s electrical engineering department. They moved back to Germany when Mario was 5.

When Mario visited his grandparents, Willi remembers that, “He played in the field, on the street. And as a little boy he was sometimes a bit of a rascal, shooting out the lamps of my garage.”

Mario played his first organized soccer with SC Ronsberg where his first coach was Helmut Albat: “He was two heads shorter than the others but still played their legs into knots." 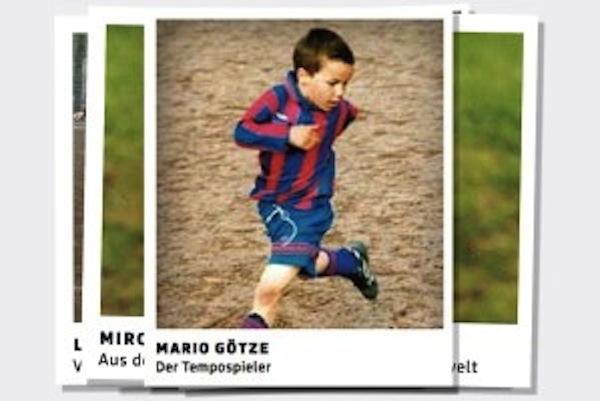 Goetze, who turned 22 on the eve of the 2014 World Cup, at which he scored two goals including the final gamewinner, included Cristiano Ronaldo and Zinedine Zidane among his heroes. He also had posters of Bastian Schweinsteiger and Mesut Ozil -- his future World Cup-winning teammates -- on his walls. Goetze had Bayern Munich sheets and bedspread but got his start at Borussia Dortmund, joining its youth program at age 8 after the family moved from Bayern.

He became part of the German national team program at the U-15 level, was selected to the tournament Best XI when he captained Germany as it won the 2009 U-17 European Championship, and played at the 2009 U-17 World Cup.

He debuted for Borussia Dortmund’s first team in 2009 and 2012 helped it to two Bundesliga titles. His father OK’ed his leaving the German school system’s highest track a year before getting a diploma and Mario instead did a two-year business apprenticeship in Borussia Dortmund’s front office.

His debut for Germany at age 18 made him the youngest Germany national team player since Uwe Seeler appeared at age 17 in 1953.

"On the street, on the field, in the living room -- everywhere. Sometimes we broke stuff in the house and there was anger from the parents. The good thing was they could never determine for sure who was at fault. We stuck together."

Mario said he started realizing he might be able to make it as a pro when he had success with the German U-17s.

”When you’re a kid on the field,” he said. “You forget everything. I simply had fun playing."

Asked in a FAZ interview how much he “had to learn” about soccer and how much was simply talent, Goetze said:

“You need talent, no question. But I think most important is not to lose focus of your goals. It’s also about work and discipline. You have to be prepared to make sacrifices. I went to school, trained, did homework. On the weekend I had games. Of course, there were times when I thought there we other things I’d like to do, but I stayed on the path and it turned it right.”

On what influences parents and coaches can have on a player's development, Goetze said:

“Parents or coaches can give advice, can set up challenges, and support, but the main thing is that one has the right attitude from within. You have to always tell yourself: ‘I want that!’ And one must know: It is ultimately up one’s self if one succeeds or not.”

Now that his first youth coach has seen Goetze reach such great heights:

“I can’t take any credit for him,” said Albat, “But sometimes I think, my God, I used to tie his shoes for him.”