Of course there were concussion-incidents during the World Cup. Given that there are head-clashes in virtually every game of soccer that is ever played, that was to be expected.

Something else that might have been expected during FIFA’s showcase game was that these incidents would have been treated with elaborate care. We surely, by now, know enough about the serious dangers that such injuries can present, to be super-cautious about their handling.

Unfortunately -- scandalously, really -- FIFA fell considerably short of the treatment standards that are now considered necessary. The prime example came in the Uruguay-England game, when Uruguay’s Alvaro Pereira was knocked out cold by a solid whack from Raheem Sterling’s knee (this was clearly “incidental contact,” Sterling was not to blame).

Pereira was treated on the field, the doctor signaled for a substitution to be made, but Pereira, now very conscious of his surroundings argued violently with the medic. And got his own way. He went back into the game.

Which is not the way that current medical thinking wants it to be. The doctor should make the decision. Here, a player who had been out cold moments earlier was allowed to overrule the doctor.

Similarly, in the semifinal, Argentina’s Javier Mascherano re-entered the game after he had collapsed to the ground after a head-clash with the Netherlands’ Georginio Wijnaldum (again, there was no vicious play involved).

And so to the final. After only 16 minutes, Germany’s Christoph Kramer took a heavy knock to the head from Ezequiel Garay (another incidental injury) and, after treatment, returned to the game. This really was a surprise, for some very good TV close-ups showed him looking decidedly dazed. He lasted another 15 minutes.

On to the 56th minute of the second half, and the worst, the least excusable, of these incidents. Argentine forward Gonzalo Higuain chased a long ball and caught up with it just inside the German penalty area. He had outpaced the defenders -- except, of course, goalkeeper Manuel Neuer, who came racing out of his goal. Higuain, with his back to Neuer, was waiting for the ball -- which had bounced high -- to drop so that he could control it. Neuer evidently saw a chance to punch the ball away before it dropped. He launched himself toward the ball, jumping heavily into Higuain who, obviously, was in the way. The collision was spectacular ... and frightening. Neuer made contact with the ball a fraction of a second before he crashed into Higuain. What made the collision so dangerous, was that the leaping Neuer smashed his knee -- his raised knee -- into Higuain’s head. 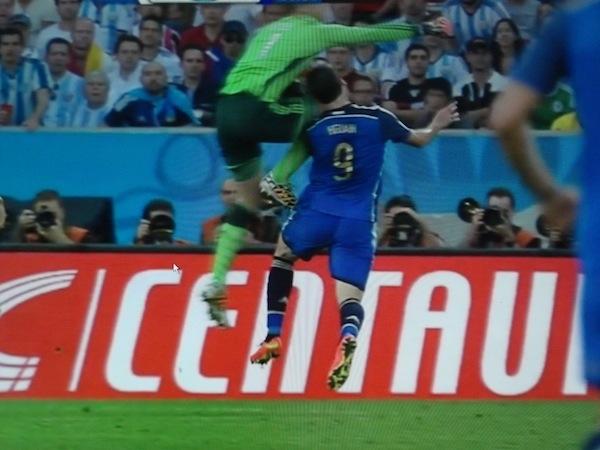 We can pause here, to take a look at FIFA’s rulebook. Under “Serious Foul Play” there is this: “A player is guilty of serious foul play if he uses excessive force or brutality against an opponent when challenging for the ball when it is in play.”

Four paragraphs later, we get: “A player who is guilty of serious foul play should be sent off.”

Neuer’s challenge on Higuain more than meets the requirements of serious foul play. Meaning that he should have been red-carded, and that Argentina should have had a penalty kick.

To get a side-issue out of the way: we don’t know what effect those actions would have had on the game. Logically, Argentina should score from the penalty and Germany should be playing with 10 men, which sounds pretty good for Argentina. But we don’t know how things would have worked out.

Anyway, I am not here concerned with who wins the game. I am primarily interested in the way that serious, or what appear to be serious, head injuries are handled by teams and their medical staff.

And the referees. The World Cup final referee was the Italian Nicola Rizzoli. What he did in the Neuer incident was so utterly deplorable and inept that it should be more than enough to get him benched for any future top assignments.

Rizzoli, some 20 yards from the play but with a clear view of the action, blew his whistle and awarded a free kick to Germany. Which defies explanation.

Because referees are not required to signal or identify what foul they are calling, there is no way of knowing what Rizzoli was up to. There was certainly no offside on the play, so we have to assume that Rizzoli had called a foul of some sort on Higuain. Given that Higuain had his back to Neuer and was fully engaged in trying to corral the ball, it’s clear that there was no foul by Higuain.

What Rizzoli had accomplished with this egregious call was to avoid having to give the penalty and to eject Neuer.

Neuer, the goalkeeper. And there, no doubt you have the explanation of Rizzoli’s shockingly bad call. Any field player who made a challenge like this -- with his leg raised high enough for his knee to contact an opponent’s face -- would almost certainly be red-carded. But goalkeepers are consistently allowed to get away with this type of foul -- just as they are allowed to jump into a crowd of players wildly trying to punch the ball through a crowd of heads.

I’ve made my position very clear on this before. Goalkeepers stretching upward to take a cross or a high ball are vulnerable. They must be allowed to raise a leg to protect themselves. But that is something very different from a full-speed jump into an opponent, using the raised knee as a battering ram.

The wild punching and the battering-ram assaults must be punished. Severely -- because they are serious offenses that can cause serious injuries. That they are rarely punished is bad enough. But that a World Cup referee should so contort matters as to give a free kick in favor of the goalkeeper and against a player who has just been the victim of a tremendous foul is appalling.

And it sure as hell does not conform to the idea of “protecting players” -- which we were told was to be one of the points of emphasis for referees in this World Cup.