Shaun Tsakiris: 'The team is a family'

Shaun Tsakiris, coach of Northern California club De Anza Force's U-14 boys team, was named U.S. Soccer Development Academy Coach of the Year for the West region. As a player, Tsakiris won the 1997 NCAA Division I title with UCLA and played in the 1999 U-20 World Cup, where his teammates included Tim Howard, Taylor Twellman and Carlos Bocanegra, and where he played against future stars such as Spain's Xavi and England's Ashley Cole. We checked in with Tsakiris to talk youth soccer in America.

When and why did you start coaching?
SHAUN TSAKIRIS: Even when playing at UCLA, I would help out with local youth teams in L.A. I was diagnosed with cancer when I was 26 and that cut my pro playing career short. I’ve always enjoyed working with kids and I knew that I wanted to stay in the game, so coaching made the most sense.

What do you like the least about coaching?
Dealing with parents. Unfortunately, the way that this sport is structured in the United States, parents have a lot more say in the development of the kids, the playing time, and overall have more influence. However, for me it’s pretty minimal and not as big an issue as some coaches say it might be.

My message to my players is always the same: You might not love everything that we do, but take away all the positives that you’ve learned and the things that you do like, and put it in your bag of knowledge to take with you when you move onto the next level or the next stage in your career.

What's the biggest mistake youth coaches make?
There’s such a huge emphasize on winning, and part of it is this culture that we have. Even if they’re not developing at the rate they should be, it seems to be fine as long as they’re winning the tournament or winning the match. That’s a huge issue in developing young players. Certainly, winning is important, but it’s not the priority. We need to be developing players, and the winning will come later.

What were your favorite players growing up and which teams do you enjoy watching most now?
Growing up, I idolized individual players such as Diego Maradona and Fernando Redondo from Argentina. Being left-footed players, I always tried to emulate things they were doing. I saw them both play in person about five or six times, and that’s something I’ll never forget.

I have three little kids of my own now, and I love hearing them talk about Lionel Messi and Cristiano Ronaldo, just like the way I used to look up to players when I was younger. I also love hearing my players talk about it and being very involved.

I’ve also enjoyed the Barcelona team from a couple years ago. That is a team we’re very lucky to have seen and experienced. I admire Pep Guardiola and try to emulate his coaching not just on the field, but also for what he stands for.

Just like Barcelona’s motto “More than a Club,” the team is a family and the way they conduct themselves is also very important, something I try to stress with my team.

How would you rate the USA's performance at the 2014 World Cup?
I’m proud of our country and the direction we’re going, and that our team was able to represent our country the way they did. Everyone has their own opinion about what we could have done differently but overall there’s no question that the buzz surrounding the games and the following of fans around our team is getting bigger and bigger.

If you had a magic wand, how would you use it to improve American youth soccer?
I would use it to put our entire country on the same page in terms of developing players. We have such a big country so it’s very difficult. We should be developing kids and top players at a much higher rate, but we don’t universally have the structure and place. We need consistency for our young players. We need a common vision and understanding to work toward a common goal of developing top players. 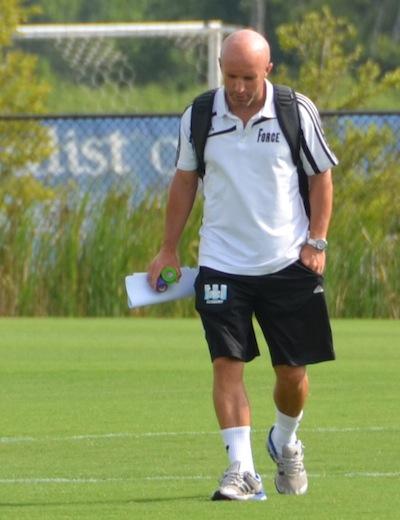