Once again, Donovan dominates the discussion

[MLS SPOTLIGHT] The paradox that is Landon Donovan found a way to shock yet not surprise those who follow the sport in the USA and around the world. After years of pouring out his soul publicly, talking of the stress and pressure and difficulty of juggling club and country commitments and still finding time to find himself, Landon Donovan has come forth to declare that when the current Galaxy season ends, regardless of how it turns out, he's done.

“For the last few years, I haven’t had the same passion that I had previously in my career, and to some extent I had felt obligated to keep playing,” he said during a press conference Thursday at StubHub Center that many had anticipated had been scheduled for the unveiling of Sacha Kljestan. Instead, for the second time in 2014, a Donovan story roiled the news cycle.

His exclusion from the 2014 World Cup team by USA coach Jurgen Klinsmann triggered a firestorm of comment and reaction. A segment of the American soccer community has for years been critical of his wavering dedication to the game, and a good portion of that reaction to the World Cup snub approved of it. His play since the World Cup has been up and down but he seemed so happy in a post-game interview Wednesday after scoring the winning goal against Bayern Munich, with which he struggled through a brief and stormy loan under Klinsmann in 2009, retirement seemed very far away. 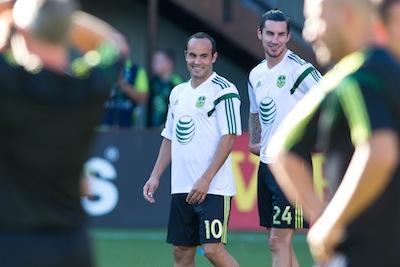 He spoke of being honored to play in the All-Star Game for a record 14th straight time. Speculation that it could be his last turned into confirmation on Thursday. Soon enough, the burden of expectation and demand will be lifted forevermore. He’s not revived his play to build a new future. He’s gathering steam for a strong finish.

“And so when that obligation goes away, I realized it was just relieving, and I could just enjoy it as a player again, almost as a kid again,” he said. “It’s allowed me now to really enjoy myself, and that’s what I want. I’d rather have three or four months of really playing well and enjoying myself than a couple years of mediocrity and not being passionate about it.”

Thus did an incredibility talented and accomplished soccer player equally renowned for his mood swings from gung-ho and go-home officially ring down the curtain on his MLS career. He may have also provided national team coach Klinsmann with the “I told you so!” justification for leaving him off the World Cup roster, though there’s no telling if his mindset could have been changed by a respectable performance in Brazil.

During the press conference and shortly thereafter on a media conference call, the resignation in his voice resonated. Since signing with MLS in 2001, he’s been the face of the league and the national team for many years and in many ways. Honest at times to a fault, he occasionally hinted the travel and commitments and pressure to perform consistently at a high level were grinding him down. Once the honor of representing the USA was stripped away, the zeal to play for the Galaxy just didn’t seem worth it.

The fire is flickering and he sees no hope of fanning it to the heat and intensity required in the professional arena. An extended break refreshed him to some extent but it also opened up that big world away from the bright lights and tough battles in brutal conditions.

“Last year I took a long break from the game, and that was really the first time that [retirement] was a real possibility,” said Donovan.  “I wanted to get away and take some time to see how it would feel after getting away for awhile. I came back rejuvenated. I came back refreshed. But after a few months even of last season, I started to have some feelings of, you know, it doesn’t feel the same, there’s not that same passion, that same energy.

“So I kept going, and there was some ebbs and flows and there were some good times through the summer – I felt great, I was playing well, we had the [Concacaf] Gold Cup, it was exciting – and then as this year started, I was enjoying myself. I was, I think, playing well, doing well, and in the last few weeks I started thinking a lot about it again. I was talking to my family quite a bit about it, and my gut just told me it was right and it was the right time.”

The long sabbatical he took after the 2012 season probably sealed the deal in more ways than one. It showed him how good life could be without the game, and also gave Klinsmann license to drop him until the 2013 Gold Cup, by which time the national team had done just fine without him. His outstanding play in the Gold Cup turned out to be his last contribution in a competitive tournament to the program he first represented at the U-17 level and continued up the ranks to his status as the men’s national team all-time leader in goals (57), assists (58), and memorable moments.

Speculation is rife that a proposed friendly against Colombia next month will be a staged as a farewell game, though there are also two pending home internationals in October, not to mention the necessity for Klinsmann to pick him. The Galaxy will surely arrange some kind of a farewell match as well either late next year or in early 2015. The all-time leading MLS goalscorer (136), 14-time All-Star, and five-time MLS Cup winner has a few more months to add to a treasure chest jammed with memories and maybe go out as a champion. He sometimes did things to the detriment of his team, but in his paradoxical personality still regards himself as a team player.

“I hope that my teammates will say I was a good teammate,” he said. “I hope that my coaches will say they enjoyed working with me and having me on their team. I hope that the fans enjoyed watching and could see how much I gave to this sport over the last 16 years.

“And that’s really it. Because at the end of the day the goals and the assists and the accolades and that stuff, in the end they don’t mean a whole lot to me. But the relationships matter. ... I think my teammates have all enjoyed being around me and playing with me, and I think they know how much I’ve dedicated to this whole thing.”