This year marks the 20th anniversary of the USA hosting the 1994 World Cup, after which the U.S. Soccer Foundation was created to distribute profits from the tournament to further the growth of the sport in this country. The Foundation has since awarded more than $59 million into soccer organizations and field-building initiatives nationwide.

Ed Foster-Simeon, the U.S. Soccer Foundation President & CEO since 2008, spoke with us about how the Foundation is accelerating its efforts to provide opportunities to low-income children across the country with Soccer for Success, a free after-school program that partners with community-based organizations across the country.

ED FOSTER-SIMEON: A few years ago, we had a listening session with groups around the country that were trying to make this happen and we learned a lot from that conversation. There were a lot of people out there trying -- but making it sustainable and ongoing is a real challenge.

Soccer for Success is in its third year now. We don’t run it ourselves. We design the curriculum. We provide the training and technical support. But we partner with groups in the communities that we feel really know how to get things done.

We have really zeroed in on under-served, economically disadvantaged urban communities.

SOCCER AMERICA: What age group does Soccer for Success aim at?

ED FOSTER-SIMEON: We’re focused on elementary and middle school. The format that we’re using is not league structured. Basically creating small-sided game opportunities in after-school hours, and on Friday or the third day they play a round-robin.

SOCCER AMERICA: How big of a problem is it that kids don’t have enough opportunities to play?

ED FOSTER-SIMEON: People underestimate this: But safety is a big issue. People talk about, “Oh, how come kids don’t go out and play like we used to do?”

But if you live in a tough neighborhood like South Central L.A. or South Side Chicago, unless the parents know there’s a safe place for them to play, the parents are quite happy seeing their kids sitting at home on the couch playing a video. Because they know they’re safe.

Creating a safe environment for kids to play after school is Step 1. In addition to the programming, we also have field-building in those communities.

The Foundation has historically focused on full-sized fields but what we found is that the space doesn’t exist in these areas. So we do a lot more mini-fields, futsal courts …

It makes a huge difference. Having a soccer space. And it's not just for the kids in program, it’s available for kids throughout the day.

SA: Soccer for Success in the 2013-14 academic year had nearly 20,000 participants in 25 cities. What are the demographics and are we talking about introducing children to soccer or providing opportunities to kids who already play the game?

In African-American communities, for a lot of them it’s their first introduction to soccer. With many of the Hispanics, they have a familiarity with soccer but don’t have a lot of opportunities for organized play. We fill that need.

We’re engaging them three times a week in soccer programming. 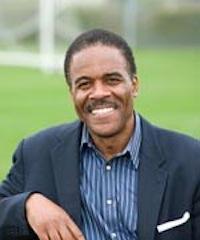 SA: The program is not just about soccer ...

ED FOSTER-SIMEON: Because we work with children in difficult circumstances we also train the coaches to be mentors for the kids. Not only teach them soccer but encourage them to stay in school. Eating healthfully and living active, healthy lifestyles.

Our goal is to have 100,000 kids in the next three or four years and hundreds of thousands of kids within 10 years.

SA: It seems that one of the great challenges of the Foundation in delivering aid where it’s needed is that those in need might not know how to get the aid …

ED FOSTER-SIMEON: That’s why the Foundation gives top priority to applications from under-resourced communities. We work with those groups. We try and identify groups and when they have weaknesses in terms of application we try and help them identify how to make themselves stronger.

SA: Do you think the program can end up making the USA a more successful soccer nation?

ED FOSTER-SIMEON: We’re the U.S. Soccer Foundation so obviously the idea that of these children one day some of them will probably be pretty good is an outcome that we would love to have, but it’s not the primary focus. The primary focus is, let’s get as many many kids as possible playing.

Whenever you get 50 kids on the field playing -- one or two will really stand out and may have the potential to be great. If you can get kids playing, that’s the first step.

SA: But when they get into their teens, those talented players still need opportunities at the next level …

ED FOSTER-SIMEON: Absolutely. That’s already happening in some cases. For example, we partner with the Colorado Rapids youth where there is a direct pipeline.

One of the things we are doing is imagining what that pipeline can begin to look like [nationally]. What’s the pathway for them? How do we get them connected? We’re talking with the Federation about that.

And one of the great things about the Soccer for Success is it gives U.S. Soccer a presence in these communities so now there's a touch point, a relationship with U.S. Soccer.

(Mike Woitalla, the executive editor of Soccer America, is co-author, with Tim Mulqueen, of The Complete Soccer Goalkeeper and co-author with Claudio Reyna of More Than Goals: The Journey from Backyard Games to World Cup Competition. Woitalla's youth soccer articles are archived at YouthSoccerFun.com.)