Justi Baumgardt-Yamada was an All-American at the University of Portland, played 16 times for the USA in the 1990s after debuting at age 17, and played in the WUSA, the first U.S. pro women’s league, in 2001-2003. Baumgardt-Yamada now coaches the Seattle area Crossfire Premier’s U-18 ECNL team and a U-12 girls team.

We spoke with Baumgardt-Yamada about her coaching philosophy, the influence of her college coach, Clive Charles, who coached at the University of Portland from 1986 until his death in 2003, and the need for more female coaches in the youth game.

When and why did you start coaching?
JUSTI BAUMGARDT-YAMADA: I was playing until I was about 28, and I coached throughout those years, especially during college, at camps and youth teams during my off time. Once I was done playing professionally, coaching was the natural path.

What do you enjoy most about coaching?
JUSTI BAUMGARDT-YAMADA: Once you start coaching a team at a young age, you watch them grow over the years; not only as soccer players, but also as individuals. I feel like as a coach, and a teacher as well, you have an impact on their life and you hope that you can be a positive influence. It’s fun watching their personalities develop, and obviously their ability on the field too.

What do you like the least about coaching?
JUSTI BAUMGARDT-YAMADA: Well, sometimes the parents can be a bit overwhelming and overbearing. Also, I’m a mom now and have two young boys who are playing soccer, but I don’t get to see them playing a lot because I’m busy coaching my two teams on the weekends. That’s the tough part for me; although I love coaching, I also wish I could go out and watch my boys play more. 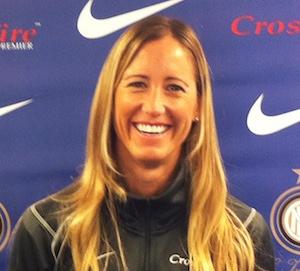 What’s the most amusing thing you’ve witnessed or experienced while coaching?
JUSTI BAUMGARDT-YAMADA: Usually just witnessing the different styles of coaching. I see a lot of coaches who get really emotionally involved and argue with the referees, and that always cracks me up. Although the ref is never going to change his mind, the coach just keeps going and going.

Who were your most influential coaches?
JUSTI BAUMGARDT-YAMADA: I would say the biggest influence on my life and my soccer career was Clive Charles, my coach at the University of Portland. He always allowed me the freedom to play and to be creative, and was never a screamer. He had a huge impact on me, not only as a player but also as a person and as a coach now.

Do you have an example of something one of your coaches did that you have adopted as a coach, or anything that you try to avoid?
JUSTI BAUMGARDT-YAMADA: Over the years, and from Clive’s coaching especially, I’ve realized that coaching needs to be done in the training session rather than at the games. Players play because they love the game, and coaches shouldn’t want to take that away from them. So, come game time, let them play, let them have the freedom to make mistakes, because that’s how they’re going to learn. Allow them to be creative, not robots out on the field.

What's the biggest mistake youth coaches make?
JUSTI BAUMGARDT-YAMADA: Over-coaching. For my style of coaching, I do as much as I can in the training sessions to teach the game, and then come game time, the game teaches itself. I’ve played against coaches who yell “pass here” and “pass there,” and that takes the player’s creativity and their thinking away from the game. The players are following what the coach orders instead of being allowed to play and make mistakes and then learn from those mistakes.

Do you think youth soccer needs more female coaches? (Only 7 percent of ECNL head coaches are women.)
JUSTI BAUMGARDT-YAMADA: Yes, I think definitely if they’re quality coaches. I think being a female coach for a female team, you can definitely be a role model for the kids. I know that the girls I coach, especially my older ones, feel more comfortable coming to me and talking about things. I think that helps, you can really develop a relationship with your players.

That’s another thing that Clive did as well, he knew his players and he knew how to treat his players. Not every player is the same, and everybody needs to be treated a little bit differently according to their personality. I think being a female coaching a girls team, you can get into that area a little bit more and help them with choices both on and off the field, and help steer them in the right direction. Overall, it’s not only about soccer, you need relationships with players that go beyond that. 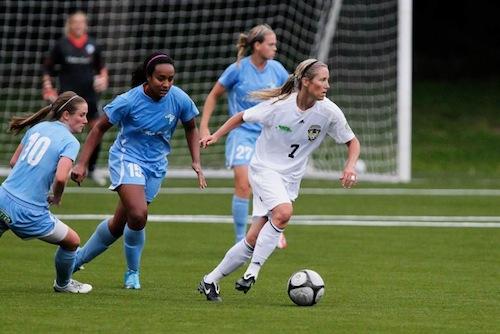 What was the highlight of your playing career?
JUSTI BAUMGARDT-YAMADA: I don’t have a specific highlight, but my college career at Portland was definitely a great experience and left me with some of my best soccer memories. Also, stepping onto the field the times I did with the national team and to play with players such as Mia Hamm, Julie Foudy and Kristine Lilly, who have paved the road for what U.S. women’s soccer is today, was a tremendous experience.

What were your favorite teams growing up and which teams do you enjoy watching most now?
JUSTI BAUMGARDT-YAMADA: My favorite teams to watch growing up were probably just the women’s and men’s U.S. national teams. And today I’d say just watching the EPL, English Premier League, games. They play such good soccer and they’re so fun to watch. I also think watching them is a great learning tool for kids. I think the younger girls should also watch ECNL games if they have the opportunity. One of the best ways to learn the game is just by watching it.

What's your advice for coaches at the youngest ages?
JUSTI BAUMGARDT-YAMADA: Don’t over-coach your players, let them enjoy the game. They play it because they love it, and if you’re over-coaching during games, then the players might lose that love and that passion for the game if they’re not allowed to go out there and play free. Make it fun for them, create a competitive environment, but also make it fun, especially at the younger ages.

If you had a magic wand, how would you use it to improve American youth soccer?
JUSTI BAUMGARDT-YAMADA: Starting at the younger ages, create an environment that is positive and fun for the kids. Also on the coaching side, get everyone on the same page in terms of letting the players be creative and not over-coaching. Don’t stifle the player’s creativity, and make sure to give them their freedom to make mistakes and learn out on the field.