Sac's attack pays off with championship

[USL PRO] Expansion team Sacramento won the 2014 USL PRO championship with a 2-0 victory over the Harrisburg City Islanders Saturday night in front of a sellout crowd of 8,000 at Bonney Field. Octavio Guzman put Republic FC ahead in the 36th minute, while Tommy Stewart had the insurance goal in second-half stoppage time. 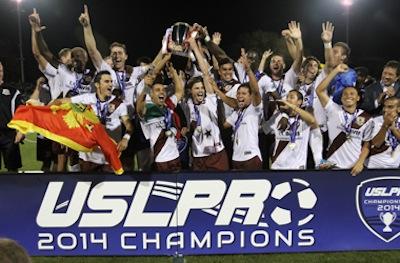 Republic FC had two chances in the first quarter of an hour, but Max Alvarez had his shot blocked on the goal line by Coady Andrews and Justin Braun had a shot that caromed off the left post.

Sacramento took the lead when Rodrigo Lopez chipped a ball to Guzman, who finished his chance from the top of the penalty area.

Braun, who has played for four MLS clubs, was a constant menace and almost added a second goal before halftime but shot over the crossbar from 20 yards. In the second half, Lopez and Stewart had their chances before Stewart would put the game away in stoppage time.

The title was the second for Republic FC's Preki as a coach. The former U.S. international won the Canadian Championship with Toronto FC in 2010, his last season as a head coach before taking over Sacramento.

“The thing it," he said, "it’s a group effort. Everybody is responsible, everybody was committed on every single play. Yeah, we made a couple of mistakes, but that’s going to happen because we’re an attacking team, we’re going forward, we’re pushing forward, and we’re creating chances. That’s what people want to see, that’s what I want to see, attacking football, and at the end of the day it paid off.”