Sport psychologist Joan Steidinger's female clients often reported that their coaches told them they need to be more like men -- that they needed to get rid of their emotions. Inspired by studies that the female brain and hormones operate differently than those of men, Steidinger has written the book, "Sisterhood in Sports: How Female Athletes Collaborate and Compete."

SOCCER AMERICA: Should coaches of even young children be aware of gender differences?

JOAN STEIDINGER: Absolutely. The one thing that’s common with all young kids is the importance of making sports fun. But there’s a difference in terms of how girls and boys approach relationships. Girls tend to be more emotional about things.

SA: What advice would you give to coaches who, after coaching boys, are now in charge of a team of teenage girls?

JOAN STEIDINGER: Be positive and give detailed instructions about how to do stuff. Girls need more really concrete, detailed suggestions. They will ask a lot more questions and are more open and want information in terms of playing better.

Encourage them to be friends with each other.

Boys do fine playing on a team if they don’t like each other if the person they don’t like is a good player. They’re not so tied into the relationships as they are into the mechanics of the game.

Whereas with girls, if there’s someone they don’t like, they’ll make sure the person knows it and it will disrupt the teamwork.

SA: What can coaches do if they notice that some girls aren’t getting along with each other?

JOAN STEIDINGER: I’ll give you one example: A basketball team I worked with … I got them in room together to talk. … One of the younger ones said to one who was kind of a problem, “If you just tell me how to do it differently instead of criticizing us it would be more helpful …” She responded really well. She wanted to know when we could have another talk session like that.

SA: How does a coach get a pulse on team dynamics?

JOAN STEIDINGER: Mix pairings. Get a sense from the team in general what works with them, what strategy helps them feel connected. It can be really important to do social stuff. ... With girls in particular I’d really work on team-building stuff.

SA: What are good team-bonding activities?

JOAN STEIDINGER: Sleepovers, doing nails, going out to eat. Maybe doing another sport, like bowling. Everybody has a chance to chat and talk with each other. 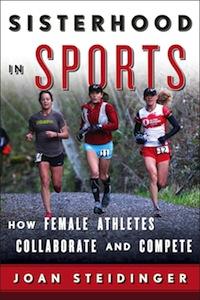 SA: How can a coach ensure that new players meld well into the team?

SA: I think anyone who has coached girls has noticed that they love to chat when they arrive to practice and I have heard coaches say it’s important to allow some of that – perhaps by letting them talk while warming up?

JOAN STEIDINGER: Social time is huge. Moving into the teenage years if there isn’t a certain amount socializing that goes on you’re going to lose players. If they talk while warming up, that’s great.

SA: What should coaches keep in mind when they address the group?

JOAN STEIDINGER: Girls are way more sensitive. Guys don’t mind it if you recognize a guy in front of the group. With girls it’s better to do it on the side. What happens if you praise someone too much or criticize her too much in front of the group -- she's embarrassed or feels picked on. And the other girls get jealous or they get critical, too.

Even if, for example, you’ve got three girls who are disruptive, it’s better to take them aside and deal with them.

SA: When I’ve interviewed coaches on the girls vs. boys subject they often responded that girls take criticism or advice on their play personally …

JOAN STEIDINGER: Right, start out with something positive they’ve done and then, say, “but you can do this … such and such."

And explain it well enough so they understand what you’re talking about, in detail.

One of the things that’s really important for girls is that they feel that they’re liked. The best thing coaches can do with a girls team is to get to know their players. And then when they’re addressing playing issues, the players don’t take it so personally.

SA: How can coaches create relationships with players so they don’t take criticism personally?

JOAN STEIDINGER: Show interest in them. For example, at the beginning of the season, take five or 10 minutes per player and talk to them a little bit. Ask them why they’re playing, how they got into soccer, what they like about soccer, and what helps them play better.