Coach Jill Ellis, currently leading the USA in qualifying play for the 2015 World Cup, has coached at every level of the youth game. She served as U.S. Soccer Women's Development Director, overseeing U-14, U-15 and U-17 girls national teams, from January 2011 until taking the full national team’s helm in May. The former UCLA head coach’s youth national team coaching experience hails back to 1999.

SOCCER AMERICA: What did you take away from your stints as assistant coach to Pia Sundhage with the national team?

JILL ELLIS: I learned a lot. Pia’s management with players is exceptional. Her outlook, her attitude, the energy she gives off.

Even at the highest level, sometimes there are doubts. Confidence does weigh in and Pia was able to establish beliefs … The players certainly believed in themselves and each other and it was very positive. … Her patience -- in a drill she would allow the drill to unfold so they could solve it.

With the national team, obviously they’re superstars in their sport but they want to get better. They want to develop.

I just had a conversation with a player yesterday, and this one of our top, top players, and she says, “I want to get better on my weaknesses. I want to do this, I want to do that."

When you have that internal motivation, for me the training environments are often environments where I’ll put them activities always related to the game, something they’re going to have to solve. Because I think they do like to problem-solve. …

Any player appreciates information. That’s what I really worked on. Giving them information.

Part of it is setting a culture of expectations of what you want and what you expect. They demand to be challenged and they want information and they want feedback.

SA: What about the role of your assistants?

JILL ELLIS: As head coach, I want my staff to be empowered to make decisions, to be able to communicate information. Because the reality is in a camp of 28 at some point they can’t all come to me. While I make myself available, giving my staff responsibility, one, they deserve it because they’re established and quality, but two, I think now the players get even more information and have someone else to communicate with, and because the staff is on the same page, it works. 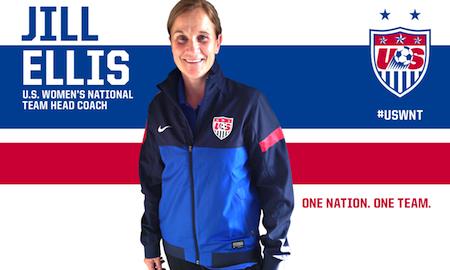 SA: In 2011, you and April Heinrichs were hired as Youth Technical Directors. How do you rate the progress on the development front since then?

JILL ELLIS: The big push for me was connecting with the club coaches because those are the coaches who have the most influence over these players, the development part, and they spent the most time with them.

We made connections with the different entities. We worked to expose the national team level philosophy to more people -- hiring club coaches, having club coaches in.

We did a lot of coaching development initiatives, we would regularly go and speak the inter-regional events. We worked to be accessible and open up channels of communication and I think it’s been very positive. I think if you ask club coaches -- many of them would say there is a better relationship and more of a working relationship

But we have to continue that -- with training centers at younger ages, scouting. … We are in the process of hiring three more development positions on the girls side.

The more we can be in there these coaches, shoulder to shoulder, I think the better, I definitely think we made strides.

SA: Should there be concerned about the USA falling in the quarterfinals of this year's U-20 World Cup (on a penalty kick tiebreaker to North Korea) and the U-17s failing to qualify for the World Cup?

JILL ELLIS: There’s always reflection. We have to continue to invest and look at our development process and I think everybody would agree with that. I also don’t think it’s a reason to panic. There are good players coming through our ranks.

I think for me it’s a matter of continuing the process. Our U-17s didn’t qualify but with some tremendous players who going to come through and probably make our full team.

We want to win, of course, at every level. But we also have to make sure the development piece box is checked.

SA: On the boys side, there’s the U.S. Soccer Development Academy whereas U.S. Club Soccer’s ECNL fills the role for the elite on the girls side. A big difference is the ECNL is age pure. …

JILL ELLIS: For development purposes, we need our better players playing up. It can’t just be about having ownership of a team and wanting to win a championship.

For special players, it has to be what’s best for their development. It sometimes means the U-15 coach letting go of their best players to play up.

I’d love to see clubs have events where they put all their top players together, where a 15-year-old is playing with 18-year-olds, because many of them can do it.

Read Part 1 of our Jill Ellis Interview ("Coaches must find their own voice") HERE.