The latest edition of our "When They Were Children" series looks at Landon Donovan's childhood soccer experience.

Josh Donovan was 5 years old when he got a brother. The family newcomer, Landon, started walking at about 10 months old.

"That was about the time he started playing with the ball," said his mother, Donna Kenny-Cash. "Josh couldn't wait for Landon to stand up and start playing soccer with him."

Donna signed up Landon for an AYSO team at age 5 and he scored seven goals in his first game. The only other organized sports Landon played was a little T-ball and cross-country in high school.

"But I played every sport you could imagine during my whole childhood," he said. "Anytime we had a chance to go outside and play, we did. 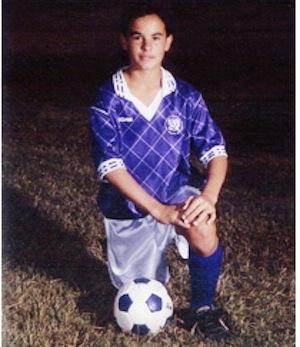 But soccer enchanted him most. Donovan even continued playing Southern California AYSO ball years after he joined a club team, whose coach Clint Greenwood recalls just how energetic a boy Donovan was. Aside from often coming straight from AYSO games to play for his club, Greenwood said Donovan would run three miles from his house to practice -- and turn down a ride if offered.

"First of all, I have a lot of energy," said Donovan in a 2010 interview. "I'm always moving and going. Especially when I was young, I was just very determined and I always wanted to push myself, and that was one example."

''His theory was absolutely perfect: As a kid, you need to touch the ball as much as you can," Donovan told me in a 2006 interview. "You should always be with the ball. You should have a feeling that wherever the ball is, you can do anything with it. No matter where it is, where it is on your body, how it's spinning, how it's coming at you, the speed it's coming at you, anything.

''You can learn the tactical side of the game later. We're Americans, we're athletes. But if we never learn at an early age to be good on the ball, then it's just useless.''

Donovan was noticed by the Olympic Development Program (ODP) and his appearances for the U.S. U-17 national team led European teams to court the teen. Donovan came home after a homesickness-plagued stint with Germany’s Bayer Leverkusen, but he had won the Golden Ball MVP Award at the 1999 U-17 World Cup in New Zealand, where the USA finished in a historic fourth place.

''Before my first MLS final, I thought to myself, 'I can't remember ever winning anything with my club teams growing up,'' said Donovan when we spoke about youth soccer in 2006.

''It's amazing to me that people put so much emphasis on trying to be tactical and worry about winning when it doesn't matter when you're 12 years old. It's sad. That's something that's going to have to change if we want soccer in this country to develop.''

Donovan was 12 when he got his first taste of the World Cup:

“Honestly, I know it sounds weird at 12 years old to know nothing about the World Cup, but I really didn't even know the concept of it. Then I went to the Argentina-Romania game at the Rose Bowl.

“I went with one of my club teammates. I think they just had an extra ticket and asked me if I wanted to go, and I said, sure, why not? And it was exciting. That was the first World Cup game I saw. I hadn't seen a game on TV. Before that, I knew hardly anything about the real world of soccer.”

Donovan ended up playing in three World Cups, helping the USA to its best finish of the modern era at age 20 when the Bruce Arena-coached USA reached the 2002 quarterfinals. Donovan famously scored the stoppage-time goal against Algeria that qualified Coach Bob Bradley’s squad to the second round in 2010.

Donovan also represented the USA at six Gold Cups, the Confederations Cup, the Olympics, and the U-20 World Cup. He has won five MLS Cups going into the 2014 playoffs and holds the record for most goals and assists in MLS and U.S. national team history.

And it all started when an older brother eagerly introduced the ball to a boy who had just learned to walk.