The latest edition of our "When They Were Children" series looks at Lee Nguyen's youth soccer experience. The 28-year-old’s 18 goals were fourth best in MLS this season, the most by an American, and led to a call-up for national team duty by Coach Jurgen Klinsmann.

“He gave me the ball when I was very little and basically taught me everything,” Lee said. “I trained with him everyday.”

Pham had emigrated from Vietnam to the USA in 1975 and finished his university education in Texas. Not too long after Lee started walking, Pham began playing in the backyard with his son, and invited soccer -avvy relatives to join them.

Now 5-foot-8, Nguyen was a 5-2 teen when he began starring for youth powerhouse Dallas Texans. The skills he picked up from backyard games compensated for his lack of brawn.

“Physically, he was very, very small but he was very, very quick with his feet,” said his Dallas Texans youth coach Hassan Nazari. “What separated him was he was capable of recognizing things that most players are unable to. When he came to me [at age 13] he was playing forward and he had to deal with these big monster defenders who would kick him. We changed the system to accommodate him so he could really express himself. We changed to a 4-2-2-2 -- with two attacking midfielders -- and he did a great job in that role, creating and attacking.”

One of the many performances that stand out for Nazari was when the Texans had two players red-carded in regional semifinal against a Georgia team played in 100-degree weather. The Texans were down, 2-0, with 15 minutes left, Nguyen scored twice and set up the third.

“He would always find a way to score goals for us or find opportunities for other players to score,” Nazari says. “He took over.”

Nguyen helped the Dallas Texans win a Dallas Cup title and a USYS National Championship. His feats at Plano East Senior High School earned him the 2004 Gatorade National High School Player of the Year award and he was the only high school player to make the U.S. team that competed at the 2005 U-20 World Cup in the Netherlands.

He played one year at Indiana University before signing for the PSV Eindhoven at age 19, having gotten Coach Guus Hiddink’s attention at the U-20 World Cup. 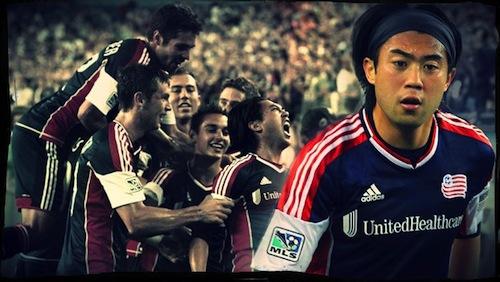 Nguyen played mainly for PSV’s reserves and moved to Denmark’s Randers in 2008, making 22 league appearances. In 2009, he became the first American to join Vietnam’s V-League, received a hero’s welcome, became a national celebrity and became the highest paid athlete in the nation.

“The soccer was great,” Nguyen said. “It fit my style. It was very technical. The coaches like to play attacking-style soccer. The other foreign players were mainly Brazilian. It was a South American style.”

After nearly three years in Vietnam, he returned to the USA to play for the New England Revolution in 2012. His outstanding performance this season earned him a return to the U.S. national team, for which he had played three times in 2007.