"We play sports because we want to be a part of something," says Briana Scurry, who was a big part of two U.S. Olympic gold-medal wins and famously saved the penalty kick in the 1999 Women’s World Cup final victory. "Whether it's recreational soccer or travel baseball, or playing with friends after school. It makes us feel comfortable -- to be part of something."

Scurry’s words came in a speech in San Francisco in support of America Scores Bay Area, which provides after-school programs that combine soccer and poetry, and which is also building mini-soccer fields on the blacktops of elementary schools.

Scurry became involved with America Scores in the nation’s capital, when she was playing for the WPS’s Washington Freedom. After-school programs are dear to her heart, she says, “Because that’s where I got my start.”

She grew up in Dayton, Minn., a town of 4,600 that was about half the size when she was a young girl.

“They always had sporting activities right after school,” Scurry says post-speech and after a long autograph session in which she's thanked repeatedly for being a trailblazer for women’s soccer. “Between that tough time, between 3 o’clock and 5 o’clock, when your parents are still at work, when they’re not home if they’re both working, which both of my parents were. That’s where I spent my time in that two-hour window and I played soccer, basketball, floor hockey -- all these different sports. Frisbee. ...

“Every time I brought a flyer home and asked, ‘Can I play this?’ They said yes. Eventually I gravitated to soccer, basketball, softball and track and went on to play those sports in junior high and high school.” 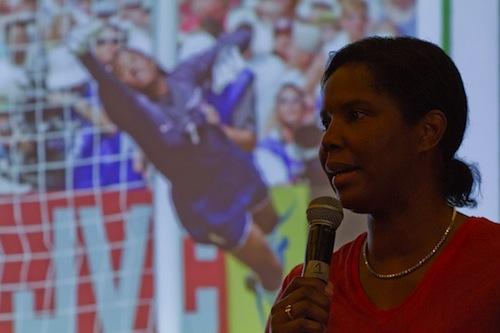 Scurry’s career ended in 2010 after she suffered a serious concussion that plagued her with headaches for three years. Thanks to successful surgery last year she’s been able to start coaching -- in addition to touring the nation giving speeches on concussion awareness, youth sports safety and “telling my story, talking about my journey.”

“The way I train keepers is I like to show them,” she says. “I was finally released by my doctor to be active.”

She trains boys and girls at various clubs in the Washington, D.C., area:

“It’s been really fun. I coach with the mental side in mind. I tell the kids to do something a particular way. I ask them what they think of that, and if they’ve been taught a different way in the past, which way they think is more comfortable for them. ...

“Goalkeeping is very much a mental game and it’s to your advantage or disadvantage -- and I try to teach them how to use it to their advantage.”

Her advice for young players?

“Two things. Have fun. And try different sports sometimes. I find a lot of the kids I’m training only play one sport – soccer, and I think I got a lot of great exposure in my other sports that helped me be a much better goalkeeper and soccer player because they all contributed to improvement.”

Coaches, she says, should not prevent players from participating in other activities:

“Professional coaches want that kid to do futsal in the winter time, spring soccer, summer soccer, fall soccer … It’s better in my opinion to allow them to be a more rounded individual. They’re going to be better off in the long-term and you might lose them if they’re not having a little bit of variety. …

Scurry recalls three of her coaches who impacted her profoundly:

“Pete Swenson, who was my club coach and always believed in me no matter what. … He introduced me to Jim Rudy, who was my college coach, DI at UMass. Jim taught me the art of goalkeeping, the proper way to do it and the efficiency of it. And he inspired me to play on the national team.”

The third was a man with little soccer experience. Her high school boys basketball coach, David Tank, who took charge of the girls soccer team for a few seasons.

“We would run through walls for him, because he believed in us as a group,” Scurry says. “He used to call us minnows. We were never the biggest, or the fastest, or the most skilled team, but we were the ones with the biggest heart. We ended up winning the state championship my senior year.”

It was an example of how a coach’s relationship with the players can be more important than the Xs and Os.

“He understood the athlete,” she says “He understood kids. … When you're a kid, everything is magnified. Am I fitting in at school? Do people like me? Are my parents going to be OK? There's a lot kids think about that coaches should be mindful of. The coach is a very important person in a young child's life.”

(Mike Woitalla, the executive editor of Soccer America, coaches youth soccer for Bay Oaks/East Bay United SC in Oakland, Calif and is a Grade 8 referee. He is the co-author, with Tim Mulqueen, of The Complete Soccer Goalkeeper, and More Than Goals with Claudio Reyna. Woitalla's youth soccer articles are archived at YouthSoccerFun.com.)