Tom Sermanni: I hope the USA does well

Tom Sermanni watched a friend's child's U-6 game last weekend. He laughs and shakes his head as he recounts how one of the coaches followed the kids around the field yelling instructions.

“Then there was a free kick, and the coach yells at his team to make a wall.” Sermanni says. “A wall! The kids couldn’t kick the ball far enough to reach the wall.”

We talk some more about his American youth soccer observations -- “There's a lot of good stuff going on, but I think as a general statement the balance still tilts toward athleticism rather than on the technical at the younger level" -- before broaching the topic of how his stint as U.S. women’s coach came to an abrupt halt.

You would expect a coach who got fired after losing just two of 24 games in a 15-month stretch to display some bitterness. Not Sermanni.

Puzzled about how it all went down, yes. Angry or bitter? Not his style.

Last April, hours after he guided the U.S. women to a 2-0 win over China, U.S. Soccer bosses took the Scotsman aside and gave him the sack. His contract, however, didn’t expire until this month.

In a state of limbo for the last seven months, he’s been helping friends train players at the youth level, “So I don’t get bored.”

“Now that my commitment to U.S. Soccer just ended, I have the freedom to look around,” he says.

The Canadians, who are hosting the World Cup next summer, have been in touch about him joining their staff. There could be TV opportunities. He could return to the UK, where a Scottish coach who took Australia to two World Cup quarterfinals would be an obvious candidate to help its women’s game continue its ascent. Something he doesn’t rule out, but sitting in a California cafe outdoors in 68-degree November weather – he can’t hide the fact that he likes it here. 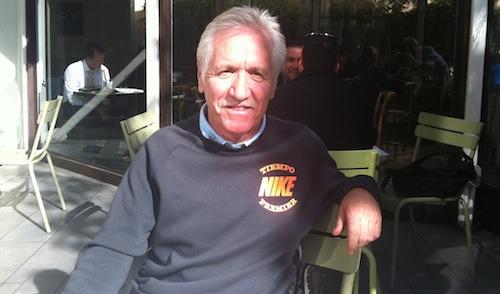 What he really would like to be doing is getting the USA ready for the World Cup, but now that task is Jill Ellis'.

Does he think the team will look much different than if he still had the reins?

“Probably not with Jill in charge,” Sermanni says. “I think she’ll get them playing a good brand of soccer. She’s really focused on the team playing well. There are always slight differences, because coaches have their own philosophies.

Although it won Olympic gold in 2012 under Sermanni’s predecessor Pia Sundhage, the USA hasn’t won the World Cup since it hosted in 1999.

Sermanni says he had been focusing on a few key elements of the team’s game:

“One was to be a bit more incisive in the final third because teams were sitting back and defending and trying to hit us on the break. So you ended up having a lot of possession.

“And it’s trying to keep the balance between keeping good possession and being incisive at the same time. Not be overtly direct but keeping the tempo up during possession and making better decisions and being more comfortable in the final third.

“The other thing was to press teams high and keep teams pinned in their own half, and I thought we were beginning to do that well.

“The final piece of that puzzle, because you have the majority of the possession and are doing the majority of attacking, is be conscious of being caught on the counter. Make sure your defense stays organized when you’re in possession. It also means the ability to defend well one-on-one.”

THE DANGER TEAMS. Sermanni sees the USA going into the World Cup as a favorite, but …

“I think I see the danger teams in two categories. I see Germany and France as the two key dangers. Outside of that, you see teams that on the day can beat those teams and the USA. That’s a decent size group now. For me that would be Japan, Sweden, Canada playing at home, England now I think, Australia, Brazil … those are countries probably don’t have enough depth to win it all, unless they go on a run, like Japan did at the last World Cup. You can never tell.”

On the artificial turf controversy, which has sparked a lawsuit from players, Sermanni agrees the women should be playing on natural grass like the men.

“I hope the quality of the turf is good at all the venues because that’s important,” he says. “But in fairness to Canada, that was in the bid from the start and I think they’ll host a great World Cup. I think it’s a bit late in the day to be talking about something that had been addressed through the bid process. The chances of putting in quality grass at this late stage won’t be great.

“But if I were still coach, I would support the players [who filed the lawsuit]. They have a right to do that and a right to speak their minds. From a coaching perspective I wouldn’t interfere in that.

“The key thing for coaches at the World Cup is to make sure the players’ heads are right. Whatever the circumstances, you have to deal with it. At the end of the day, you have to do it on the soccer field.”

BLIND-SIDED. Sermanni believed he had the team on the right track and still does not understand why he got fired.

“It came out of the blue,” he says. “This happens in this game. The only thing I’m disappointed in is I thought I should have been given the opportunity, if things weren’t going right, to have a meeting, and either rectify stuff that they might not be happy with or explain what we’re actually doing. Perhaps by doing that I could have allayed any concerns they may have had.”

“We had I would say two bad results, at the Algarve," he says. "The Denmark game was an anomaly. That happens everywhere in soccer. Ultimately, we could have won the game. We played Sweden and Sweden basically had one shot on goal and we missed a penalty.”

Besides, Sermanni says, the losses came while he was assessing players for a World Cup that was still more than a year away.

“We gave players opportunities,” he says. “We looked at players we hadn’t looked at before. We brought some younger players into the squad. More importantly we played players who hadn’t had many starts in games that really mattered.

“Sydney Leroux is a classic example. She had never started a game until 2013. You can’t judge someone on 15 minutes in a game. I was certainly getting to the stage where you know the formation or your squad and team for the World Cup. …

“We had a significant injury situation. We got to a situation where the injured players were coming back – the majority of them. The players who were overseas had come back. And the squad was beginning to get settled.”

He says the players “seemed to be taken aback and blind-sided” by his firing: “I would say at least 20 players at the camp came to see me afterward, unsolicited … I don’t think they saw it coming.

“Maybe I missed something. Maybe I lost my intuitive skills, but I did not sense discomfort within the squad. And I believe I had good relationships with the senior players.”

He said he spoke regularly with the two most senior players, Christie Rampone and Abby Wambach:

“In Abby’s case, she may not have had as much game time as she had in the past, but her importance to the squad didn’t diminish. The reality is 2013 was a year when I had to look to see if there were other players who could step up when we needed them. Because you can’t keep relying on Abby when she gets into that later stage of her career. … And the same with Christie, but I really emphasized to them how important they were to the squad. I don’t believe there was a breakdown between myself and the senior players.”

He says that in hindsight, he should have immediately brought in his own assistant coach, “someone who I’ve worked with before and knew how I operated.”

Sermanni coached Australia at three World Cups and his club coaching includes stints with the WUSA’s San Jose CyberRays and New York Power, and Japan’s Sanfrecce Hiroshima (men). He thinks his calm and steady approach to the job may have been misinterpreted.

“I'm not an intense in-your-face, don't talk to me on matchday kind of person, he says. “I try to keep a relaxed atmosphere. I think people sometimes tend to get the wrong impression what I do.

“I think my management style -- which has worked for me pretty well -- was probably different from a lot of coaching styles are,” he says. “I’m a collaborator kind of person who works very much in a team situation rather than a guy who says we’re doing X, Y and Z, and this is what’s happening. I think some find it hard to adjust to that kind of flexibility. That may have been different to what the norm had been here.

“When we have a camp, on a Monday I don’t set what I’m going to do on a Thursday but I have an idea of what I want to accomplish in the camp. Some people prefer an environment where the coach comes in and says, 'Bang, bang, bang this is what we’re doing.'”

“But I never had issues. The support I got from the organization in terms of camps and games was fantastic. I never had any issues with the staff.”

How close is he following the U.S. team?

“It’s interesting because I’ve never been in this situation before,” he says. “I watch some of the games. I don’t watch games in their entirety. I still find that a little bit hard. ... The athletes and the staff who work with the team are extremely hard-working and dedicated and I hope they do well.”