Robbie Rogers, like all players who make it to the higher levels of the game, spent a lot of time playing soccer on his own, away from the organized practices and games. And like most such players, he has a tale of indoor destruction.

Rogers’ came as a very boy when he ignored house rules and broke a “treasured family heirloom vase” with a shot in the living room.

“I was so upset that my Mom wound up comforting me,” he says in his memoir "Coming Out to Play," co-written by Eric Marcus.

Now 27, playing for the Los Angeles Galaxy and aiming for his second MLS title -- he won his first with the Columbus Crew in 2008 at age 21 -- Rogers got his introduction to the game because his siblings were already on a team. He started accompanying his older sisters at age 3:

“To keep myself occupied, I kicked around a ball on the sidelines, running back and forth and never stopping until it was time to go home.”

A coach who noticed Rogers’ enthusiasm for the ball suggested his parents sign him up for AYSO at age 4 and he joined the Purple Octopuses. At age 7, he got recruited by the South Bay Gunners, “which for a time was an all-Hispanic team, except for me.” He was also two years younger than his teammates when he joined. (A future teammate on the Gunners was Kyle Schmid, son of then-LA Galaxy coach Sigi Schmid, now boss of the Seattle Sounders, and Rogers’ coach with the title-winning Crew.)

Aside from soccer, Rogers did judo, filling weekends with lots of driving to games and tournaments: “Mostly I loved it, but sometimes it got to be too much, so [my brother] Timmy and I would hide our dad’s car keys so we could just stay home and chill. Dad always found them.” 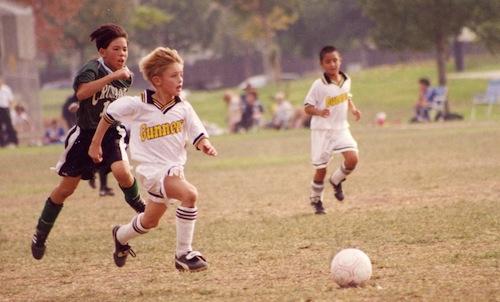 Rogers tried other sports but didn’t like them. His mom recalls he scored three touchdowns in flag football, then announced it was the “stupidest game because all they do is hand you the ball and you have to run with it.” The speedy kid got turned off from baseball when a coach told him to step in front of pitches so he could get a walk and start stealing bases. Besides, he didn’t like the standing around waiting for the baseball to arrive.

His favorite team was the Arsenal “Invincibles” of the 2003-04 season and his favorite player on the team, Thierry Henry. (“Whenever we played soccer in the streets I always called my team Arsenal.”) But his all-time favorite player was Zinedine Zidane.

As a teen, he got the valuable experience of playing with and against older players, such as when he suited up for the PDL Orange County Blue Star, where teammates included retired German star Jurgen Klinsmann, who played under the pseudonym Jay Goppingen.

And Rogers had to contemplate the decisions that face many elite teen soccer stars. Leave home to join a residency program. Play college soccer or go pro.

After much consideration he accepted an invitation to the U.S. U-17 Residency Program in Bradenton, Fla., in 2002, which “turned out to be like Lord of the Flies.” Approaching the end of his high school years he had to choose between accepting a pro offer in the Netherlands and the University of Maryland. His father said he should go pro, his mother wanted him to go to college, and after weighing advice from others, such as Klinsmann, he opted for Maryland, where in his freshman year Rogers helped the Terrapins win the 2005 national championship.

After his freshman year, Rogers did go pro in Europe, with Dutch club Heerenveen, a stint cut short by severe homesickness. At age 19, he returned to the USA for a successful MLS career.

Rogers played for the USA at the 2007 U-20 World Cup and the 2008 Olympic Games in Beijing and represented the full national team 18 times.

"Coming Out to Play" provides a revealing look into the path to stardom and the challenges and choices young American soccer players face. But, of course, Rogers’ story is about much more. It is about the cruelty of homophobia and how he eventually overcame it and made history. 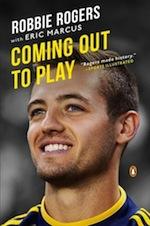 Growing up, he says “It never crossed my mind that I could be gay and play soccer. … I tried my whole life not to be gay.”

Describing the locker-room culture, Rogers writes: “The words ‘fag’ and ‘gay’ were tossed around like an all-purpose putdown, and as much as I tried to protect myself from feeling wounded every time I heard someone say ‘that’s so gay’ or ‘don’t be a fag,’ it cut deeper into an already raw wound.”

“Of course, when you’re 15 or 16 years old, you have no idea what it means to keep such a tightly held secret about something so powerful and instinctive as your sexuality. It would take me years to realize what a painful, lonely, and ultimately impossible path I’d chosen.”

When he finally decided to come out, an incident convinced him he was correct in believing that a gay man could not survive as a professional soccer player. During a practice session with his English club, Stevenage, where he played on loan from Leeds United, a coach said, “You guys are passing the ball like faggots.”

Rogers announced his retirement in February 2013 and posted a “coming out” statement on his blog.

The reaction was one of overwhelming support from the soccer world, including from MLS, U.S. Soccer, MLS and national team teammates, and coaches such as Bruce Arena and Sigi Schmid. He also received loving support from his family, and decided to restart his soccer career.

He is now famously known as the first openly gay male athlete to play in one of the top five team sports in North America.

He has also succeeded in producing a thoroughly engaging book about an important chapter in American soccer history.