Leo Durocher was a baseball lifer who was a better manager than player. So much so that his teammate, Babe Ruth, called him the "All-American out."

The Baseball Hall of Famer is arguably best known for saying, “Nice guys finish last.” As he won two World Series, playing with the New York Yankees in 1928 and managing the New York Giants in 1954, I don’t know if that means he was a nice guy, in his own view, during his six decades in baseball.

But for the youth soccer referee, I have found that nice guys, and gals, do not finish last and they often finish first.

Refereeing in New York, I generally do not hear complaints about other officials but if I do, the two main complaints are that the refs are “mean” and do not run the full length of the field. Perhaps these two complaints are related as these refs have too many games to officiate due to a shortage of officials on very active weekends. They could be in a bad mood because of all the games they are assigned, knowing that they will not be able to keep up with play.

While there is not a simple fix for being in a good position for five games, being nice to players and coaches, plus smiling, is not difficult and goes a long way to winning friends and influencing people in youth soccer. After all, the players, coaches and spectators might not know the subtleties of the offside rule or the advantage clause but they can figure out pretty quickly if the ref is a positive person.

Arrive at the field with a smile on your face. Perhaps you don’t feel like smiling -- maybe you don’t feel well or did not get a good night’s sleep. Smile anyway. It could even put you in a better mood.

Attitudes are contagious. If you’re having a very good time, you would be surprised how many other people you are affecting with your positive attitude. Those song lyrics often come true, “When you’re smiling, the whole world smiles with you.”

Never bring your problems to the soccer field as it will greatly affect your refereeing and other people’s perception of you.

What is becoming more and more obvious to me is that being a nice person quite literally pays off. Others might win the battle but they lose the war as people do not want to deal with the complainer, the egotist or the self-centered person. For example, complaining a good deal might briefly get them what they want but they either eventually get tuned out or others do not call, such as an assignor on a weekend that has few games.

I’ve heard assignors say such things as, “He’s an excellent referee. Too bad he does not focus on that and keep his mouth shut as people complain about his bad attitude all the time” or “His fellow referees just do not like him as he is always complaining so the games are given to refs with a better attitude instead.” 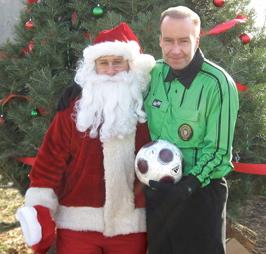 Ref Randy Vogt is on the right.

(Randy Vogt has officiated over 9,000 games during the past three decades, from professional matches in front of thousands to 6-year-olds being cheered on by very enthusiastic parents. In "Preventive Officiating," he shares his wisdom gleaned from thousands of games and hundreds of clinics to help referees not only survive but thrive on the soccer field. You can visit the book’s website at www.preventiveofficiating.com.)