Don Garber on the state of MLS

MLS commissioner Don Garber certainly hit all the bases in his annual state of the league address.

In a round-table discussion with representatives from the league media partners, he addressed a wide range of topics, underscoring both the progress the league has made and everything that remains unresolved, from immediate issues like keeping young Mexican star Erick "Cubo" Torres in the league ("We would like to") and reaching a new collective bargaining agreement with players to long-term issues like attracting national team stars in their prime to MLS and keeping the best young American players in the league.

Here are some key topics he addressed ... 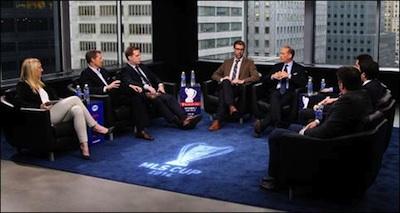 CBA NEGOTIATIONS. The current four-year deal between the players and the league expires on Jan. 31.

“This process now is in the beginning phases," said Garber. "It’s talking about what our respective priorities are. There will likely be another meeting in December. And then we’ll get down to the negotiations in earnest, and I am confident we will be able to reach an agreement that is good for the league and good for the players.”

While the agreement ends Jan. 31, the real drop-dead date is the opening week of the season, expected to be the first weekend March. Garber said neither the owners nor players are going into the negotiations thinking about a work stoppage, which has never happened in the history of the league. He said the start is for both sides to understand what is important to each other.

“The training wheels are certainly off," he said. "We are no longer a toddler. We are getting into that college age, where we are still trying to figure it all out. Nobody has all the answers, but we recognize we are standing on our own two feet. All you can say is, it's very good for everybody, including our players, that the state of Major League Soccer is better today than it had been 20 years ago or 10 years ago."

EXPANSION. MLS will begin play in New York and Orlando in 2015 and Los Angeles and Atlanta in 2017, leaving two spots open for the league that has a stated goal of reaching 24 teams by the end of the decade.

MLS recently heard presentations from four ownership groups -- two from Minneapolis and one each from Las Vegas and Sacramento. If also must decide how much longer to give David Beckham's group to come up with a plan for a stadium in Miami, where two proposals were nixed in the face of political opposition.

“We love Miami,” Garber said. “There have been some pro sports struggles there, so people are questioning whether Miami can support an MLS team. I believe it can, but only if it has the right stadium. If we don’t have the right stadium, we’re not going to Miami, nor should we go to any market without the right stadium plan. Until we get [a stadium] finalized, we can’t make a commitment to go to Miami.”

All those issues will be discussed at Saturday's board of governors meeting in Los Angeles.

"We need to make some decisions and come out of that meeting with a point of view on timing," he said. "What do we think is going to happen and when the next number of teams are going to be formally announced?  We are very focused on that happening in 2015, for sure.  It's conceivable it could happen within the next six months from January to June, and that's really our goal, to be able to put a stake in the ground on when the next team or two teams are coming in."

Garber could not say how large beyond 24 teams the league will eventually grow to.

"I don't know the answer to that," he said, "and I think it speaks to the fact that we're not a mature business, not a mature league."

NYCFC AND LAFC. New York City FC will begin play in 2015 and the second Los Angeles team -- called Los Angeles FC for the time being -- will begin two years after that though neither has a permanent stadium deal in place.

NYCFC will play at Yankee Stadium, where 11,000 season tickets have been sold for the 2015 season.

"We will have a [soccer] stadium in New York City," Garber said. "They are committed to it; they are very, very focused on it.  They have been working from the day their team has been announced to try to get that stadium solution, and the temporary solution in Yankee Stadium is going to be a good one."

NEW YORK RED BULLS. Garber said after traveling to owner Red Bull headquarters in Austria that the New York Red Bulls owner was committed to the league, despite an SI.com report that Red Bull was losing interest in the club and would sell the club if presented with an offer.

"The Red Bulls are committed to Major League Soccer," he said. "How this discussion got out that they weren't, I don't understand. I was out in Austria recently I met with [co-founder] Dietrich Mateschitz, as we have met in the past. How anybody can question the commitment that this team has -- they've spent more than any other club.

"So there has always been this intrigue because you have a situation where you have somebody [Mateschitz] that doesn't come to games regularly. Well, he owns F-1 teams and owns extreme sports -- he doesn't do that.  We have a lot of owners that don't go to every game, and that's true in the NFL, and the NBA and Major League Baseball, also, but there is this thing that has this momentum here that is wrong."

PLAYOFF FORMAT. Garber could not confirm an SI.com report that MLS will expand the number of playoff teams from 10 to 12 in 2015 and add two more games to the play-in round. But he did say that scenario would best serve the league as it moved to 24 teams, so he suggested it was best to make the change now.

He did say the playoffs were here to stay, despite the extra emphasis on the regular-season and Supporters' Shield race and complications in scheduling they pose.

"Nobody can argue with me," he said, "that our playoffs this year weren't the most exciting games that we have had in Major League Soccer.  So while I might believe and agree with some point of view that the European model is what made the beautiful game beautiful, nobody could argue that Sunday night and Saturday night those games in frigid cold weren't among the most, among the best games in MLS history. That's why we love playoffs."

SCHEDULING. Garber said MLS hoped to enhance interest in the end of the regular season with the introduction of simultaneous scheduling of the five games in each conference on the final day of the 2015 regular season.

To address television issues, he added that MLS hoped to introduce flex scheduling for the second-to-last weekend of the regular season so televised matches were those of the highest interest, not matches predetermined before the season even had begun.

He added that in a perfect world MLS would take off every week during FIFA international windows, but he called it an insurmountable issue.

"These are challenges that the NBA and the NFL don't have to deal with," he said.

On entering other competitions like the Libertadores Cup, Garber said improved relations with Conmebol would allow for better dialogue, but he again came back to scheduling issues that stood in the way.

PLAYER MOVEMENT. After the criticism of the lack of transparency in how Jermaine Jones ended up at New England, where he has helped the Revs advanced to MLS Cup, Garber said he was committed to making more transparency in MLS roster rules a priority in 2015.

"One of the things you will start seeing," he said, "is that the concepts that we have in place that allow players to come into the league, that allow a priority order, will be shared with the public after we come up with a way to organize it in buckets so people can understand it."

mls
6 comments about "Don Garber on the state of MLS".
Read more comments >
Next story loading