Las Vegas gets its soccer stadium, too

It isn't every day that two cities pass measures to build soccer stadiums. Hours after the D.C. council approved a development plan for a 20,000-seat soccer stadium in the Buzzard Point neighborhood of Southwest Washington, the Las Vegas city council narrowly agreed to help fund a soccer stadium, contingent on the city being awarded an MLS expansion team. 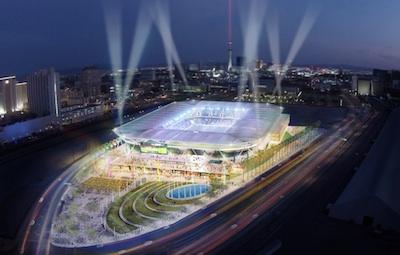 There was heavy opposition to the city's financial support for the development plan proposed by Findlay Sports & Entertainment and The Cordish Cos., a Baltimore-based developer. They had been granted exclusive rights to build a sports venue on 13 acres in Symphony Park.

The value of what Las Vegas will contribute is significant:

$38 million to $48 million. The appraisal on the Symphony Park parcel, where the stadium will be built;
$31.5 million. Infrastructure improvements for utility lines, drainage and streets;
$25 million. The stadium share of a $50 million stadium-parks bond (repaid with $3 million annually over 30 years from a hotel tax) to held pay for the stadium;
$20 million. A 1,200-space parking garage it will build (the stadium will keep the revenues from 90 events a year).

The developers will pay:

All this spending may never happen if Las Vegas doesn't get an MLS team. It is generally believed to be third in three-city race with Minneapolis and Sacramento for one or two (if Miami falls through) remaining expansion slots. MLS hopes to make a decision on its next expansion plans in the first half of 2015.

4 comments about "Las Vegas gets its soccer stadium, too".
Read more comments >
Next story loading