No time to end the one thing I love to do

Taylor Leach, a two-time first-team All-SEC defender, led the University of South Carolina to the quarterfinals of the 2014 NCAA Division I Women's Tournament. After starting out with the Gamecocks from Cleveland Internationals and Wayne High School in Ohio as a reserve forward, she became one of the nation's top center backs. Leach, who hopes to be drafted in January's NWSL College Draft, will be chronicling for Soccer America the transition from college soccer to the pro game.

From the first time I stepped on the soccer field, I immediately fell in love with the game and everything that came with it. The competitive environment requiring a certain strategy to come out on top was something that intrigued me from the very beginning. I loved the fact that the sport involved 11 players at once all collectively working together to achieve a common goal.

As I continued playing the sport that sparked a great deal of interest, I developed a passion for the game. When I was on the field, nothing else mattered, just that specific game. Everyone has their one thing that gives them peace and soccer was and still continues to be my sense of peace.

When my love for the game developed into a passion, I began to dream. Being a professional soccer player like my childhood hero, Mia Hamm, was something I obviously thought about, but I also thought of the steps I had to take in order to hopefully achieve that goal. Playing Division I soccer at a well-known institution would have been a dream come true. I was able to achieve that dream when I was recruited to play at the University of South Carolina. 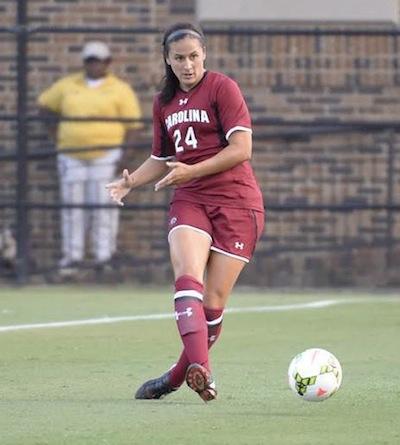 Not only was I able to play at a big school, but we were a nationally ranked team each year. My last year was one to remember when we made a run in the NCAA Tournament, making it to the Elite Eight round after being North Carolina. Professional soccer wasn’t a topic that crossed my mind too often while I was playing college soccer, because my focus was solely on that. As my time at South Carolina neared its end, I couldn’t see myself ending the one thing I loved to do so much.

This will give me the opportunity to chase my childhood dream of being a professional soccer player.  The next few months are crucial in improving upon my weaknesses as well as my strengths as a player. I am looking forward to where this journey takes me.