Indy Eleven, which sold out all 14 games during its debut season in the North American Soccer League, is pushing ahead with its campaign to seek public support for its proposed 18,500-seat multipurpose stadium to be built in downtown Indianapolis. 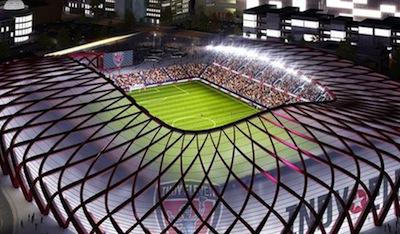 Including Indy Eleven games, the stadium is projected to cost $82 million cost and expected to host at least 50 events annually, starting with the venue’s anticipated opening in 2017. Multiple locations are being considered in downtown Indianapolis.

“By leading the league in attendance last year, our growing fan base built Indy Eleven into a team that all Hoosiers can root for,” said Indy president and general manager Peter Wilt.  “These same fans will be the ones who build this stadium because it’s paid for completely by those who attend stadium events. If you don’t go, you won’t pay. It’s that simple."

The key to the financing is a 10 percent "tax" on ticket sales for stadium events that would pay for the bond that would underwrite the construction costs. The Indiana General Assembly would have to approve any funding mechanism.

Indy Eleven would be a primary tenant at the publicly owned stadium.