U-20 World Cup draw is kind to USA

0210wc sked The USA will face Myanmar, host New Zealand and Ukraine in group play at the 2015 U-20 World Cup May 30-June 20. The draw was much kinder to Coach Tab Ramos’ team than two years ago.

At the 2013 U-20 World Cup in Turkey, Ramos’ team was drawn with three tournament favorites -- European champion Spain, 2009 U-20 World Cup Ghana and eventual 2013 champion France – and exited in the first round. Ghana finished third in 2013.

Myanmar, making its U-20 World Cup debut, clinched qualification by upsetting UAE, 1-0, the Asian quarterfinals. New Zealand, which qualified as host, is winless in three U-20 World Cup appearances and lost all three of its games in Turkey 2013.

"It's always an exciting moment to know your group as the reality sets in for the World Cup stage," said Ramos said in a press release. "New Zealand, Ukraine and Myanmar will certainly prove to be formidable opponents. At this phase, every country is a challenge, so we will need to be clicking on all cylinders tactically, physically and mentally. We made great strides during the qualifying tournament, and we're confident that with our deep pool of players that we can have a successful run at the World Cup."

The top two finishers in each group and four best third-place teams advance to the round of 16. 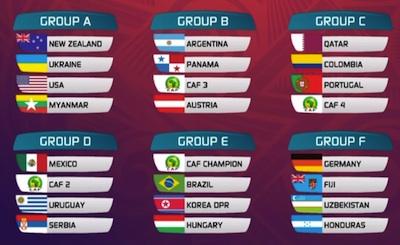