Late call from U.S. is no problem for Hedges

When the initial roster for the U.S. January training camp came out, one of the notable omissions was FC Dallas defender and captain Matt Hedges.

Disappointed as he was, he didn’t deviate from his offseason regimen, knowing the start of MLS preseason camp loomed just ahead. So he also rolled with the flow when two days into camp his short-term future changed yet again. Sounders utility man Brad Evans was out, Hedges was in. A belated call from Jurgen Klinsmann is better than no call at all.

“I thought maybe it was a possibility because I had a good season,” said Hedges of his mindset after Seattle had eliminated FCD from the playoffs on the away-goals rule after the teams tied on aggregate, 1-1, in November. “I was getting ready, working out, trying to stay sharp. It was disappointing when I didn’t get called in. I knew the camp was coming up and I knew I wasn’t going to be there.

“But I knew our preseason was coming up so I didn’t change my preparation at all. Then a couple days into [the U.S. camp] I get a call from Jurgen saying, ‘There been an injury and we want to bring you in.’ I was ready. I didn’t really change my offseason.

“I was really happy that I tried to stay as fit as possible because I really needed it during the camp. It was tough.”

Toughness and fitness discussions have dogged Klinsmann and the national team since it lost to Chile, 3-2, and defeated Panama, 2-0. Hedges played just the last 18 minutes of the latter match and so wasn’t tested to the extent as was many of his colleagues. By the time he replaced DeAndre Yedlin at right back there wasn’t much push from the Panamanians anyway, but a first cap is a first cap, regardless of circumstances.

He can’t recall playing on the corner of a back four, either, but that too, isn’t of great importance. Defenders who are 6-foot-4 and 185 pounds are seldom stranded on the outside but the smart ones know what is required.

“As a centerback you know what the responsibilities of a right back playing next to you should be, so I just kind of drew on that experience for my however many minutes in the game,” he says. “I tried to play right back as I would want a right back to play next to me, so it ended up working out.

“Last year [FC Dallas] got a lot of red cards and we ended up playing three guys a more than anybody thought we would. I played on the outside of that a couple of times and I had done it in club soccer before but right back in a four-back, not really.” 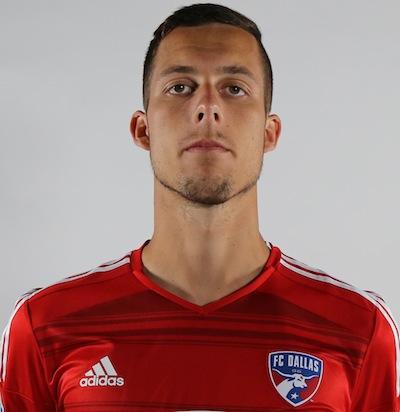 Hedges’ career changed dramatically last year. In just his third pro season and at the ripe age of 24, FCD head coach Oscar Pareja named him a team captain, a title already held by midfielder Andrew Jacobson. Changes in the midfield had shunted Jacobson out of the starting lineup, and by July he’d been traded to expansion club New York City FC, which loaned him out to Norwegian club Stabaek.

Hedges says he didn’t feel uncomfortable barking orders to teammates older and more experienced than he. Centerbacks are required to boss people around anyway so the captaincy just extends his authority. “They were positive and really helpful,” says Hedges. “That made it really easy. There wasn’t any friction or anything like that. The guys accepted it. Before I was captain, they knew I was one of the leaders. They all embraced it and there were no issues.”

Pareja, a former FCD player who took over as head coach after guiding Colorado for two seasons, invoked many such changes in his first season at the helm. FCD has finished the 2013 season seven points shy of a playoff spot and in ninth place. Change was imperative.

“I was impressed with his behavior when I came here last year,” says Pareja of Hedges, who led North Carolina to the 2011 NCAA title in his senior season after transferring from Butler. “In the first week in my job here, I saw his commitment, his discipline, the way he embraced the game, and his approach. I gave him a little bit of a push to make him feel comfortable and believe he can do it at his age, and lead a team.”

A rough patch following a strong start to the 2014 required determination as well as leadership. FCD won four of its first five, then lost five of the next six to settle in at a very mediocre 5-5-1 with one-third of the season played. It actually sunk to 5-7-3 before getting back on track. A 10-game unbeaten run that included seven wins propelled it back into the playoff tier and an eventual fourth-place finish.

FCD clinched its playoff spot by rallying to beat the Galaxy, 2-1, which coming into the Oct. 12 match had posted a 14-0-4 record after scoring the first goal. Hedges, though, doesn’t cite that game nor any other late-season result as essential; rather, he believes FCD’s strong start instilled enough confidence and belief in Pareja’s ideas to ride out the tough times that were to follow.

“I think the beginning of the season, the way that we started with a lot of wins, it showed everybody that it can work,” says Hedges. “The way we want to play and the way we want to do things, was working. Those first games showed us we were doing things the right way and we could get results that way.”

One of Pareja’s important tasks during preseason will be to determine who will be first choice alongside Hedges in the middle, and perhaps replace him if Klinsmann issues a recall during the MLS season. Zach Loyd has been a constant in the back line either at outside back or in the middle; Walker Zimmerman’s comfort on the ball is essential in Pareja’s system; and Stephen Keel has knocked around the league for years.

Hedges says one key to Pareja’s success is, “He treats the team like a big family. It’s like we’re all his sons.” The feeling is mutual. In assessing the rapid rise of Hedges from draft pick to international in just three years, there’s indeed a tint of fatherly pride when Pareja speaks of him.

“Now I see him on the national team in an international game dressing in the United States colors, it’s a lot of a joy, and a lot of credit to him,” says Pareja. “He did a great job. We’re very proud of Matt and it’s a long journey for him still. He has a high ceiling and we just need to keep planting good information there, because he will respond.”