Kaka comes through; Villa not quite; Kelly not at all

The great Orlando-New York clash managed to do what so often doesn’t get done ... it produced a wonderfully climactic finish and the right result.

There was no way not to be impressed by the atmosphere in the Citrus Bowl -- even via television, it came over charged with everything you, and MLS, could want -- noise, color, excitement, enthusiasm, and expectation.

That the game itself didn’t really live up to the hype came as no surprise -- such games rarely do. Much of the hype inevitably focused on the stars, Orlando’s Kaka, and NYC’s David Villa. And we saw yet again -- how many times have we seen this? -- how difficult it is for one player, however brilliant he may be -- to put on a 90-minute show. Villa was poorly supported by his teammates, several of whom -- were this an audition -- would surely not be asked back.

NYC spent most of the game looking like what they are -- a disparate group of players who are not yet a team. Who probably never will be, for some personnel changes are surely necessary. Mix Diskerud made a satisfying debut, becoming more assertive as the minutes passed until, at the 76th minute, he found himself with space and time, at the edge of the area. Not much of either of course, but more than enough for him to get off a gracefully curving shot to give NYC the lead.

Kaka fared somewhat better than Villa, getting off one thunderous shot in the first half -- unfortunately for Orlando it was straight at NYC goalkeeper Josh Saunders. It was also the only shot of the first half. But Kaka is a free kick specialist, so set-plays (I’m not sure why they get called set-pieces these days -- sounds pretentious to me) are important to him.

Right at the end, one minute into added time, Kaka came through -- his free kick wasn’t that great, but one of the NYC players managed to give it a huge deflection that brutally wrong-footed goalkeeper Saunders, and Orlando had tied the game.

It deserved at least that, and in a moment all the pent-up atmosphere in the stadium transformed itself into a wondrous display of ebullient relief.

There was, really, only one lamentably jarring note sounding in the game, and that was referee Alan Kelly and his three diving calls. All of them against Orlando players.

I’ve spent over half an hour studying and restudying those calls, forward, backward, sideways, slo-mo, real time -- the whole lot.

My verdict? Quite simple: All three were calls that should not have been made. Because none of them is clearly a dive. But that seems not to be the Kelly approach. He is out there looking for diving. So anything that looks like diving -- he’s going to call it.

But if he -- or anyone -- can study the replays and then honestly avow that they saw clearly that there was no contact in any of those incidents, I’d be very surprised indeed. Taking the calls in order:

No. 1 -- 29th minute. NYC’s Andrew Jacobson moves in to tackle Brek Shea -- or maybe only to stop him from passing the ball. Shea is quicker than Jacobson, moves towards the goal line -- Jacobson is a step behind. What the replay shows -- according to me -- is that there was plenty of contact between Jacobson’s left leg and Shea’s right leg. Enough to destroy Shea’s balance. There’s more to say about Jacobson, I’ll come to that shortly.

On this play, referee Kelly is about 10 yards away, with an unimpeded view. The other important point is that this took place in the New York penalty area. So Kelly saved himself the bother of having to call a PK.

No. 2 -- 40th minute. In midfield -- the center circle actually. Orlando’s Kevin Molino receives the ball and immediately starts to dribble strongly forward. NYC’s Ned Grabavoy tries to keep up, actually puts his arm across Molino’s shoulder, trying to hold him back -- a foul that passes unobserved, certainly un-called, by Kelly. As Molino continues his dribble, Grabavoy’s attentions force him to his left, where Jeb Brovsky awaits -- though what Brovsky then tries to do is difficult to work out. As Molino, moving fast, approaches, Brovsky moves his left leg forward and plants it firmly -- into the path of Molino. It doesn’t look like a tackle (anyway, Molino had played the ball away well before Brovsky moved his leg. Very obvious contact as Molino trips over (or is tripped by) Brovsky’s leg. I can’t see any reason at all -- other than a perverse determination to make a diving call -- why this should be anything other than a foul by Brovsky (a yellow card, too -- as it’s a tactical foul). It could be argued that Molino could have avoided Brovsky’s leg. Possibly he could, but the moves necessary would probably mean a loss of balance, and he’d surely lose any hope of catching up with the ball. The key here is this: Why did Brovsky firmly plant his leg in Molino’s way? Any problem that results from that is obviously Brovsky’s fault. Though not to referee Kelly -- who was some 20 yards behind the play on this one -- not well-positioned.

No. 3 -- 78th minute. We’re in the NYC penalty area again. Cristian Higuita bursts forward, with the ball. And who is there to challenge him? Why Jeb Brovsky. And once again Brovsky is alarmingly late with his tackle -- he is nowhere near the ball as he slides in and swings his right leg toward Higuita’s legs. And down goes Higuita. This action takes place at full speed, all over in a second or two. Referee Kelly is not well placed -- some 12 yards away, with at least two players in his sight line. But again he absolves Brovsky. And books Higuita. And again he avoids having to give a penalty kick. <br.
A very lucky man, Mr. Brovsky, I’d say (though his luck suddenly failed 13 minutes later when he was the player who deflected Kaka’s free kick into the NYC net).

I strongly believe that diving calls should only be made when the referee has -- not just a reasonable certainty -- but a strong certainty that a player has dived. That could not possibly be the case in any of these three incidents, because the evidence suggesting dives is is far from convincing. Unless . . . you are determined to find diving. But if you are doing that, then you have seriously compromised your refereeing objectivity.

Three diving calls -- all against the same team -- in one game. I don’t think I’ve ever seen that before. Two of the calls featuring the same defending player Jeb Brovsky. The other call featured Andrew Jacobson, and his actions after the clash with Brek Shea are worth looking into. Because these are actions that we frequently see from defenders nowadays. 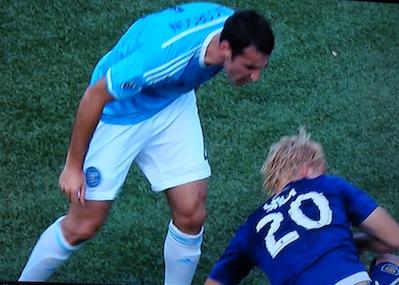 Firstly, as Shea starts to fall, Jacobson peels away and raises both his arms, in the fake “hands-up” position -- which is supposed to indicate “It wasn’t me. Never touched him.” Then we get Jacobson leaning over Shea on the ground shouting at him -- talking to him? Now, who is that aimed at? Could it be that Jacobson -- and all the other defenders who can’t time their tackles properly -- have found that snarling at a grounded opponent is a good way to lure the referee into making a diving call?

Which can certainly be interpreted as an attempt to con the referee. But it won’t be seen that way by referees who are already disposed -- or have been conditioned -- to make diving calls.

mls, new york city fc, orlando city, referees
18 comments about "Kaka comes through; Villa not quite; Kelly not at all ".
Read more comments >
Next story loading