This year marks the 40th anniversary of Pele coming to the USA to play in the original NASL. The man responsible for bringing O Rei to the Cosmos and changing the course of American soccer history was Clive Toye.

Pele’s contract with Santos had finally run out in 1974 and he was being courted by Juventus and Real Madrid. Toye told him, “If you go there, all you can win is another championship. Come with us and you can win a country.”

Toye, a chief sportswriter for the Daily Express in his native England, had come to the USA in 1967 to help launch the NASL. During his 18 years in the league, he also lured Franz Beckenbauer, Carlos Alberto and Giorgio Chinaglia to the USA, and sent his players and coaches into grassroots America to spread the seeds for youth soccer.

“We were told very, very succinctly that soccer would never succeed,” says Toye, now 83 and residing in Florida. “That Americans would never like it, would never play it, and never watch it.

“You can’t go anywhere in the United States now without stumbling over a soccer ball or seeing a soccer field.”

The NASL folded after the 1984 season. MLS finally arrived in 1996 and is now in its 20th season -- a lifespan that exceeds NASL’s by three years.

“I think their business model right from the beginning was better than ours,” says Toye. “But it is inevitable that whatever league is in business these days would be successful because the game is successful.

“I don’t discredit MLS for being part of growth of soccer. I certainly do not credit them with being responsible. Soccer has grown at every possible level and in every possible corner of the country because of what happened in the good old days -- because of the people who were convinced and courted and affiliated back then.”

On the level of play in MLS compared to NASL, Clive says:

“Nowhere near as good as the NASL. Some of it is pretty good. Some of it is worth watching. There are good players. There’s obviously good fan support. But to compare it with the better teams in the NASL back in the days before the death -- you can’t compare it.

“There are people who think of the NASL as having foreign players past their prime. Yes, we did. But we also had foreign players who were in the middle of their prime. People forget that. Trevor Francis, Bruce Grobbelaar, Peter Beardsley, who went back and played 59 times for England. He was past his best? I don’t think so. Graeme Souness. …

“We were releasing players to play for their national teams all over the damn place. We were able to sell players back for more money than we paid for them, because they were in their prime.” 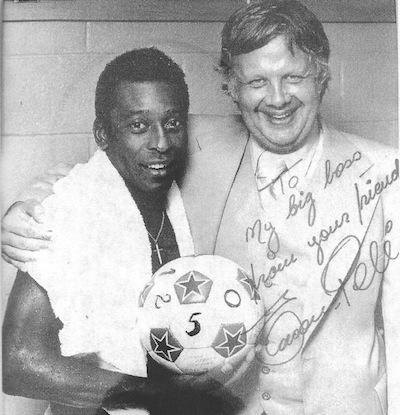 In the shadow of MLS, the Cosmos have been reincarnated and play in the new, second division NASL.

“I think their hearts are in the right place, which is more than can be said for their neighbors -- across the river and up the road.”

Toye’s referring to the New York Red Bulls who play in New Jersey, and Yankee Stadium-based New York City FC, which is operated by the same ownership group as Manchester City and Melbourne City.

“Let’s face it. Harrison, New Jersey is not New York, will never be New York,” Toye says. “I think [Red Bull] is an appalling name. A product which is unacceptable, to me anyway.”

(When the Cosmos moved from New York City to Giants Stadium in East Rutherford, New Jersey, they dropped “New York” from their name.)

On the field, he believes MLS should place a “serious restriction on the number of foreign players and a serious increase in the number of Americans.”

Indeed, the continued reliance of foreign products, including on the national team, which had seven on its 2014 World Cup roster, gets Toye riled up.

“We should be looking around here at what’s available and encourage that talent instead of going around the world looking for people who happen to have American fathers,” Toye says. “Look where American serviceman have served over the last century. Why not just set up DNA stations in all the other countries and see who else has an American gene in their blood. I mean, come on.”

As far the performance of Coach Jurgen Klinsmann’s team at the 2014 World Cup – Toye was not impressed.

“Not happy with it at all,” he says. “I’m not involved enough to say he should have picked Charlie instead of Fred, or Bill instead of Joe, but when I look at the team that played in Japan/Korea [2002] and look at this team [2014 World Cup] -- and I can say there is no progress.

“And I cannot believe that American soccer has not at least maintained the same standard, if not has achieved improvement. I really believe more time should be spent on developing American talent.”

Following his children’s book, “Toby and The Greatest Game” and the colorful NASL history, “A Kick in the Grass,” Toye has just published his third book, “Anywhere in the World,” in eight years:

Among the accounts is how Toye bought the U.S. TV rights for the 1970 World Cup in Mexico for $15,000 -- but couldn’t find a station to show the games when he offered them for free.

Fox and Telemundo combined paid more than $1 billion for rights for packages, including the next two World Cups and the Women’s World Cup.