Jake Edwards is no different than many of us when he describes himself.

Out of high school in New Jersey, where his father, an airline pilot, moved his family when he was a teenager, Edwards worked as a volunteer at the Giants Stadium venue during the 1994 World Cup. "An eye-opener," he says to the operations side of the game.

You've got to be just a bit obsessive to stick with the sport through a 12-year pro career -- 11 years in England's lower divisions and one with the Charleston Battery -- like Edwards did after finishing up at James Madison University. He scored 74 goals as he bounced around 10 teams in England, finishing up at sixth-level Solihull Moors, where he -- well -- did it all.

"Toward the end of my career, I found more of an interest in the commercial side of the game," he said. "At my last club, I was player-coach and commercial manager. I did the sales, sponsorship sales, put the marketing plans together. All with no budget." 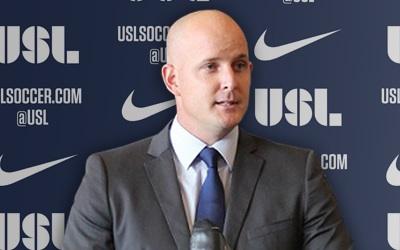 To go further on the business side of the game, Edwards realized he needed more, so he went back and got an MBA at the University of Warwick in England, doing his thesis on -- the soccer nut in him at it again -- fan engagement by English soccer clubs. That helped get him in the door at Octagon, the giant sports marketing firm for which he worked first in the Middle East and then in Atlanta. At Octagon, Edwards helped write business plans for new sports leagues. That experience became useful as he was approached about working for the USL.

The USL isn't new -- it was founded in 1986 by Francisco Marcos as indoor league based in the Southwest -- but only recently has it taken off after a quiet relaunch in 2011 following a split between the USL's owners and a group of team owners who formed the NASL. Of the 24 teams that will play in the USL, 13 are new in 2015, including seven MLS-owned and -operated second teams. "I hope we don't add 13 teams every years," says Edwards before adding that the league expects to have 30 teams in 2016 and could eventually get to 48 teams.

"It was clear," says Edwards, who joined the league as executive vice president in 2013, "that we needed a long-term strategic plan." Destination 2020 addressed how the USL would expand into new markets, how its partnership with MLS would work and how the league would feel. By 2020, all teams need to be in their own soccer-specific stadiums.

The USL recently did a rebranding, dropping the "PRO" from USL PRO, complete with a new logo and new web site. It's added a business development department to handle new commercial initiatives, a club services department and begun new fan engagement initiatives. "You're not just a league any more," says Edwards. "You're a digital marketing company."

The USL has changed a lot since Edwards played in Charleston in 2002. The A-League often gets a bad rap, but it had a lot of good teams back then. Seattle, Portland, Vancouver and Montreal later all moved on up to MLS. Mark Watson, more recently the head coach of the San Jose Earthquakes, played with Edwards in Charleston. Eric Wynalda was signed to play for the Battery in 2002 but a knee injury ended his pro career.

Edwards says the problem with the A-League was that it wasn't connected to anything and it had no solid relationship with MLS, then in survival mode after folding Miami and Tampa Bay. He says the difference in how clubs run their businesses and the game-day experience their fans enjoy is generally like night and day between the USL of today and A-League of 2002.

The A-League had its share of rising stars -- Brian Ching was a first-team all-league pick in 2002 -- but it also had a lot of journeyman. MLS will populate the new USL with dozens of young players -- college draft picks, Homegrown signings, even amateur Academy players still in high school -- through its eight second teams and 12 affliate programs.

"We've got a good aspirational story with players moving up through the ranks to MLS," Edwards says, "and with clubs moving up through the ranks." Orlando City, which sided with the USL during the tumult of 2009-2010, has joined MLS for the 2015 season after four seasons in USL PRO. For Sacramento Republic FC, "it’s not a matter of if, but when” it joins MLS, according to Sacramento mayor Kevin Johnson. The Austin Aztex, who play in a city with MLS ambitions, moved up from the PDL to USL in 2015.

The USL has a growing MLS influence, but don't look for it to become just a souped-up version of the defunct MLS Reserve League. Edwards says there is a finite number of MLS clubs for whom adding a second team makes business sense in their markets. He says the USL is talking to more independent groups than MLS clubs -- and the league has multiple groups of interested owners in most markets. "We can look at them," he says, "in terms of not just meeting league requirements but adding a lot of value and expertise."

Edwards admits MLS teams -- in particular, the presence of some of the biggest names in the league -- add a lot of value to the USL and are a drawing point for prospective owners of independent USL clubs. "A lot of that," he says "comes off the back of the interest and opportunity to play against some of the MLS clubs."

As new USL owners have entered the sport, some talk openly about having MLS aspirations -- it's a good p.r. move -- but Edwards says a club has to do a lot right to get on MLS's radar.

"It's important that ownership groups we are evaluating are 100 percent committed to the USL from Day 1," he says. "We spend a lot of time with them as we go through the process and we understand the aspirations of the ownership groups and have to appreciate that. But also first and foremost we want these guys to contribute heavily to the growth and success of the sport and our league and become a real hub in the community."