Michael J. Agovino's "The Soccer Diaries: An American's Thirty-Year Pursuit of the International Game" hits especially close to home for those us who once enjoyed weekly doses of Toby Charles on "Soccer Made in Germany," remember when Univision was called SIN, and got our introduction to the Italian Serie A thanks to RAI’s "Novantesimo Minuto."

For those of us who witnessed the glory and demise of the old NASL, the dark era of the 1980s, and the phenomenal rise of American soccer to where we’re at now -- a pretty much thriving 20-team MLS and more soccer on TV than we could ever have imagined back in the days when we sought out ethnic bars with satellite dishes.

But “Diaries” offers more than an insightful account of American soccer’s evolution over the past three decades -- it also hits a chord with anyone who’s enjoyed meeting fascinating characters at pickup games, who’s discovered new friends and previously unfamiliar cultures through soccer, and experienced the emotional roller-coaster of soccer fandom.

Agovino’s soccer memoir is somewhat an American version of Nick Hornby’s “Fever Pitch.” But Hornby’s obsession was with Arsenal. Agovino’s is with every aspect of soccer and started at a time (1982 when he was in eighth grade) and a place (the USA) where feeding that obsession required ambitious exploration.

So enchanted does the Bronx-raised Agovino become with soccer once he gets a taste, his father tries to help him satisfy his appetite. Hugo Agovino takes Michael to the UNICEF 1982 FIFA World All-Star Game at Giants Stadium, where Michael sees the likes of Michel Platini, Paolo Rossi and Kevin Keegan, and also gets his first taste of soccer writing in a game program that includes pieces by Paul Gardner, Brian Glanville, Rob Hughes and Juvenal.

His dad takes him to Cosmos games and seeks out soccer companions for his son: “My father had good news: he found someone who liked soccer. It was his barber, Lorenzo, on Twenty-Eighth Street and Park Avenue South.” 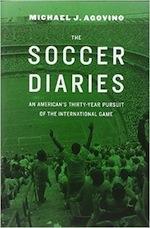 Eventually, Agovino’s obsession takes him -- and the reader -- to Rome, London, Munich and Zurich; to World Cup, European Championship, Champions League, and myriad other games, including MLS. It’s part of his pursuit of the friend he met in eighth grade:

“The friend being the sport of soccer. This friend has been full of contradictions: it’s been simple but nuanced; endearing but tedious; often inspiring though sometimes dark; intellectual but primal; sometimes stylish and poetic, other times ugly and crude; at one time it was elusive, but now it’s ubiquitous.

Soccer fans around the world may share some universal qualities. But American soccer fans -- because of the unprecedented manner in which the game evolved in the USA -- are unique. Agovino’s diary is in many ways also their story.

"The Soccer Diaries: An American’s Thirty-Year Pursuit of the International Game" by Michael J. Agovino (University of Nebraska Press 2014) 312 pages.

(Agovino is also the author “The Bookmaker: A Memoir of Money, Luck, and Family from the Utopian Outskirts of New York City.” He has written about art, film, literature, music, fashion and soccer for publications including Esquire, The Atlantic, GQ and The New York Times.)