Since its launch in 1980, when three foreign teams competed in a field of 26, the Dallas Cup has become a veritable Youth World Club Cup.

Its 36th edition -- officially known as the Dr Pepper Dallas Cup XXXVI -- ended on Easter Sunday. Forty percent of the entrants arrived from abroad, 40 percent from around the USA, and 20 percent from the Dallas area.

Brazil’s Coritiba won the most coveted prize, the U-19 Gordon Jago Super Group, with a 3-1 win over Mexico’s Monterrey.

The U-19 Super Group hasn’t been won by a U.S. team since the Dallas Texans in 2006. Last year, the U.S. U-20 national team reached the semifinals and the last club team to reach the semis was FC Dallas in 2011. This year, the three U.S. teams were FC Dallas, LA Galaxy, Real Salt Lake -- and none reached the knockout stage.

The Dallas Cup is one of the few non-Academy events the U.S. Soccer Development Academy allows its teams to participate in. And in the Super Group they are at a bit of a disadvantage in that they’re fielding U-18 teams.

“You notice it,” FC Dallas Academy coach Francisco Molina told the Dallas Morning News. “I think physically, speed wise, size wise, they’re just half a step ahead. In a high competition like this all it takes is that half an inch, that half of step.” 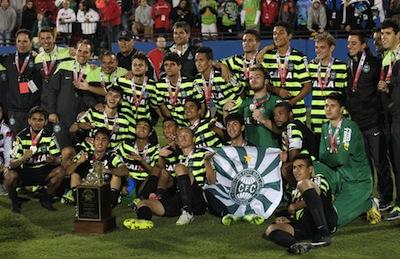 FC Dallas and the Galaxy, which was thumped, 7-0, by defending champion River Plate, went winless. Real Salt beat Mexico’s Tigres and Spain’s Valencia, lost to Coritiba, and missed out on a semifinal spot on goal difference to England’s Everton, which fell to Monterrey.

Mexico’s Santos Laguna beat Monterrey in the U-17 Super Group final. The non-super U-19 division was captured by Mexico’s Chiapas with a 2-1 win over FC Dallas.

Three U.S. teams did pick up titles in the lower age brackets, including U-16 Seattle United 98B Copa, which became the first Washington state team to win a Dallas Cup.

Also happening in North Texas over Easter weekend – the final phase of the 2014-15 Generation adidas Cup, an annual tournament for U-17 MLS academy teams.

Seventeen of the 20 MLS clubs were joined by 10 foreign clubs and Chivas USA, whose first team folded after the 2014 season.

Of the MLS entrants, FC Dallas got farthest in the top tier, the Champions Division, falling to Eintracht Frankfurt on PKs after a scoreless semifinal.

The New York Red Bulls’ Ryan Mingachos scored the overtime winner against a man-down Independiente in a 2-1 in the Premier Division final.

Northern California youth soccer advocates, including Santa Clara Youth Soccer League President Tino Silva, have launched Stand Up for Santa Clara, in response to the San Francisco 49ers' failure to make good on their promises to underwrite new soccer fields to compensate for using the Santa Clara Youth Soccer Park across the street from Levi's Stadium for parking. The 49ers aims to shut down the  Soccer Park, which serves 2,500 youth players, for NFL games and special events, approximately 40 weekends a year -- 80 percent of the youth soccer weekend schedule. In a San Jose Mercury-News guest editorial, the group wrote: "Now, it's clear that we cannot count on the 49ers to do the right thing for Santa Clara. Nor can we rely on elected officials, who are persuaded by a professional football team or influenced by campaign contributions,"