Making a Strong case for soccer

As lead soccer announcer for Fox Sports, John Strong has quickly moved onto the national stage from a modest beginning working high school events in Oregon.

He has yet to celebrate his 30th birthday, so John Strong isn’t qualified to look back on a long and illustrious career in broadcasting.

A full and busy workload doesn’t allow much time for such reflection in any case. Wednesday morning he flew from Portland, where he lives, to Los Angeles to work an FA Cup quarterfinal match between Blackburn and Liverpool from the Fox Sports studios. Then it was back up to Portland to help his wife, Nicole, move into their new house.

“I was originally off during the week so we thought this would be a good time and last week they called and said, ‘We need you,’” says Strong, who took a full-time job with Fox after working the Timbers’ regional broadcasts as well as for NBC. “I’ll give Fox credit. Normally, Fox is really good about it and I said, ‘We’re closing on a house,’ and they said, ‘Yeah but we need you.’ At the end of the day they’re the one paying for the house.”

On Friday night, he’ll head back down to L.A. to call the Galaxy-Seattle game on Sunday afternoon with partner Alexi Lalas, whom he once admired as a player while coming of age as a soccer fan. They are less than two months into their pairing as Fox’s MLS announcing team and so far it seems to be working 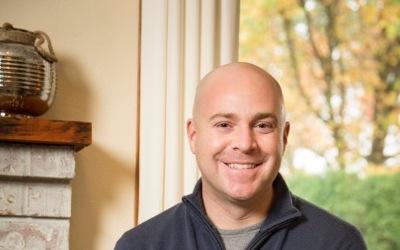 “Alexi Lalas is fascinating,” says Strong, whose zeal for broadcasting prompted him to start up  an internet outlet in high school to call football and basketball games. “He’s such a big personality and he elicits such strong opinions. In the past, we’d always been in different places on any given weekend, when he was at ESPN I’d be with NBC. That’s been an amazing relationship to build. In the last two months, it’s been remarkable how much we’ve sort of clicked. Certainly on-air I’ve really liked out chemistry.”

Strong’s dizzying rise from high school student at Lake Oswego High School, just a few miles south of Portland, to national broadcaster is, he admits, partially due to “a lot of ridiculously good breaks.” He’s also a product of circumstance.

“I wanted to do broadcasting, because it was my dream and my passion, and part of it also was too that there was a really good chance that I was going to be cut from the varsity soccer team,” he says. “Which was legit, because I was awful and had no work ethic.”

From somewhere a work ethic emerged. Four years of working college games and events -- lacrosse, soccer, hockey, softball -- led to a radio job at KXL in Portland, and after calling a few games on radio and TV as a backup to regular announcer Andy McNamara during the Timbers’ days in the USL, he got the full-time gig on the eve of their first MLS season in 2011.

“Everything in my brain stopped,” he says. “It was one of those incredible moments for me to be the TV voice, at 25, of the Portland Timbers, the team I’d grown up with that was coming to MLS. It does not get better than that.”

Strong has family ties to the Timbers that pre-date his birth in 1985, three years after the NASL Timbers folded. His grandfather worked for Louisiana-Pacific, a manufacturer and marketer of building and lumber products that started up in Portland in 1973. The Timbers joined the NASL in 1975 and Strong’s grandfather would attend league meetings as its representative.

“He always laughed about it,’” Strong recalls. “He’d say, ‘I’m an accountant in Coos Bay, Oregon, and here I am in this room with Joe Robbie and Lamar Hunt and Phil Woosnam, and I couldn’t have had less of an idea what I was doing there.’”

Strong’s aunts would work Timbers games as a summer job and his mother, an elementary school teacher, invited players to make appearances. In his youth, he knew well a team that no longer existed. The Timbers came back as a USL team in 2001; he attended USL games in high school and college and remembers standing in sections and traveling to games in Seattle and Vancouver with the first vestiges of what has transformed into the wild and crazy Timbers Army.

“It was just getting started, it wasn’t really organized, but for a few years while going to school that was what I did,” he says.

His broadcasting background opened a door to Timbers telecasts in 2006. For the next few games, his soccer workload gradually increased as he juggled talk shows and other programming staples.

A 2009 U.S. Open Cup match between the Sounders and Timbers – at PG&E Park, as it was known then -- is forever burned into his circuits. “A sellout crowd, the Sounders had just come into MLS and we were still a USL team and nobody knew if Portland was going to get its act together to come into the league,” he recalls. “I was calling it on radio.

“It’s the biggest game for the team and Roger Levesque scores [48] seconds in and everything went sideways from there.” The Sounders won, 2-1, and eventually won the first of their four Open Cup titles as an MLS team. He revels in the rivalry Portland and Seattle have forged but has greatly expanded his horizons since joining Fox.

Since his move onto the national stage as the lead MLS play-by-play announcer, he’s taken steps to ensure he can prepare for any team and any matchup. For last week’s Sporting Kansas City-Philadelphia game, he delved into the records to dig up the fact Philly lost 15 points last season by conceding goals in the last 15 minutes of games.

“So of course, what are the odds Philadelphia will be leading with 15 minutes to play in Kansas City?” he asks. "There’s no chance of that. All that wasted energy. But I had it just in case.” The preparation paid off when SKC struck twice in stoppage time to win, 3-2.

He also had a tidbit or two on the Union's Raymond Lee, a fourth-round draft pick out of Saint Louis signed in early March. Lee made his first appearance as a pro in the 78th minute and might have gotten the last touch on the winning goal credited to Krisztian Nemeth.

“You have to be prepared for every possibility and having something to say, that’s the edge, that sets you apart,” he says. “It’s like taking a test; you don’t know what the questions are going to be but by gum, you’d better have an answer for them.” (Yes, he actually says “by gum.”)

In the next few months, Strong will need plenty of answers. He’ll continue to work MLS, Europa League, and U.S. games until early June, when the Women’s World Cup takes center stage. Fox will use approximately a dozen announcers to cover the games and work studio segments. For the event, he’s hired his former broadcast partner, Erick Olson, who helped him launch the operation at Lake Oswego High School and thus takes his broadcasting arc to a new level.

Strong lauds the efforts of his broadcast colleagues and others, such as producer Shaw Brown (formerly of ESPN and NBC) to elevate and enhance Fox’s soccer coverage. Details about the Women’s World Cup will emerge in the next month or so as his juggling of games and flights and a new house and a 15-month-old child continue. He turns 30 on June 21, which is the busiest day of the WWC round of 16 (three games scheduled), so the celebrations will be brief. Considering how quickly he’s arrived from where he was, he’s fine with that.

“Every year there’s been some amazing thing out of left field that’s vaulted me way further than I ever thought I would be at this point,” he says. “So I’ve just tried to work my butt off every single day to earn and deserve where I am and hope that no one figures out that I’m still a young kid that probably shouldn’t be here.

“There’s a lot that’s out of my control. This is such a subjective business. There were things about how I sound on the air and how I look and all these things that sort of affect whether or not I get opportunities. But one thing that is in my control is I’m going to outwork everyone as much as I can. There’s not going to be anyone who goes into a game more well-prepared or well-researched. That’s a really important thing for me.

“If someone decides to give a job to somebody else for some other reason, okay, but I never want it to be because I’m not working hard enough to make sure I’m ready to go every day.”