Ask her coaches past or present to describe Alex Morgan's attributes and the answers are always similar: fast, strong, lethal with her right and left foot, and good in the air.

“Those are things I worked on for years,” said the 25-year-old Morgan, who will lead the U.S. attack at the Women’s World Cup this summer.

Morgan started playing soccer in Southern California AYSO: “All my best friends played AYSO. Our parents were the coaches and managers.”

She didn’t start playing club ball until age 13, but at age 10 her father, Michael, bought her a Kwik Goal.

“He bought one of the full-size nets you can build on your own, because there weren’t full-size goals for kids to shoot on where I grew up,” Morgan said. “During high school I worked out with my dad three times a week for about an hour. He’d be goalkeeper and I’d shoot from both sides, using my right and left foot.”

At age 15, she started working out in the gym with a trainer, “helping me get strong, helping me get sharp, helping me with balance. … Things that have become my strengths are things that I worked on diligently the last 10 years. It didn’t just come naturally.”

We asked Morgan to offer some advice for parents of aspiring young players.

“My parents were very supportive and positive,” she said. “My mom [Pam] was always the super positive, supporting parent and my dad was the thinker who wanted me to see how I could make myself better and help the team. But at the same time, he would listen to me when I said had enough. When my dad wanted to talk about soccer-specific stuff and I didn’t want to hear it -- I would tell him and he’d listen.

“I had a good balance and an honest relationship with my parents.” 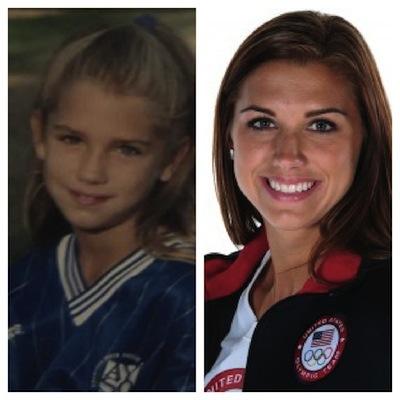 Morgan, who grew up playing a variety of sports and started competitive soccer later than is common in today’s youth soccer landscape, says a player's ambition must ultimately come from within.

“I think now that girls are committing to competitive soccer at such a young age,” she said, "parents feel a responsibility to push the child -- but if you’re into soccer and passionate, you push yourself. If parents push too much, it can backfire.

“It’s great sometimes for parents to talk about the game with their kids. But I think parents sometimes overstep the boundaries and start acting like a coach. … And right after a game is not the best time to talk about it.”