With the countdown to the kickoff of the 2015 U-20 World Cup down to 38 days, the USA tied, 2-2, with Qatar, which qualified for the tourney in New Zealand by winning the Asian championship.

In the friendly clash in Austria, the USA took the lead in the 22nd minute on a goal by Amando Moreno but the Qataris responded with strikes in the 46th and 75th minutes. Conor Donovan scored the equalizer in 84th minute following a U.S. corner kick.

Donovan, an Orlando City SC defender who played one year at North Carolina State, started one game and made one appearance off the bench during the USA's six-game qualifying campaign. Forward Moreno, who left the Red Bulls in early 2014 for Club Tijuana, made two appearances as a sub in qualifying.

It was the USA’s third game since qualifying. During a March camp in England, the USA fell 2-1 to Tottenham Hotspur in a closed-doors game and 2-1 to England’s U-21s in front of a crowd of 11,406. Lynden Gooch scored against Tottenham and Maki Tall vs. England.

Limited is how much one can read into these preparation games. Much of their purpose is to help Coach Tab Ramos determine how many of the players on his roster for qualifying should be replaced. But the Qatar match did mark the first U.S. game against a fellow qualifier, and one that faced off against U.S. first-round opponent Myanmar (in Group A along with host New Zealand and Ukraine).

Myanmar (formerly known as Burma) is making its U-20 World Cup debut thanks to winning a quarterfinal win, 1-0, over UAE at the Asian Championship Myanmar hosted. In the semifinals, Qatar, which also had already clinched, beat Myanmar, 3-2, in overtime, and won the final, 1-0, over North Korea. Most of its U-20 players have been parked at clubs in Europe as it amps up its national team program ahead of the 2022 World Cup of which it is the controversial host.

For Qatar, this marks a third appearance at the U-20 world championship. It exited in the first round in 1995 but its runner-up finish to West Germany in 1981 marked the nation’s greatest soccer achievement.

That 1981 U-20 world championship was the biennial competition’s third edition and the first the USA qualified for. Qatar tied the USA, 1-1, in group play.

Ramos' team faces Croatia, which did not qualify for the New Zealand, on Saturday, also at Red Bull Arena in Wals-Siezenheim. 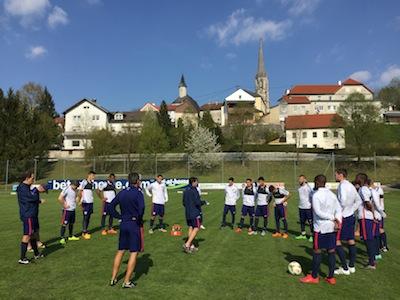 The USA will play three friendlies, against Siroki Brijeg, Bosnia U-18s and a third opponent yet to be announced.

Nine of the players on the roster were part of Perez’s squad that finished February’s Copa Chivas in Guadalajara with a 1-2-1 win-loss-tie record while scoring only twice. They include Klinsmann and both scorers, Mauricio Pineda and Eryk Williamson.

In 2013, then 14-year-old Jonathan Gonzalez of Santa Rosa, Calif., received invitations to train at 14 Liga MX clubs. He signed with Monterrey in February 2014.

Sueno Alianza alums include Julio Morales, who after 2010 Sueno was signed by Chivas Guadalajara and played for Mexico at the 2013 U-20 World Cup, and Dennis Flores, who made his Liga MX debut with Leon last year. Both Morales and Flores were called into the USA's U-23 national team camp earlier this year.

The top 24 players in U-15 and U-19 age groups from the events, which are cost-free, in 11 cities will advance to an all-expenses paid trip to the Alianza National Finals in Miami.

This year, Alianza de Futbol has launched of Alianza Femenil, the first national women's Hispanic tournament. More than 3,000 players are expected to compete in U-18 and open-age divisions.