Two goals last weekend on different sides of the Atlantic indicate the U.S. frontline is looking sharp one month ahead of the 2015 U-20 World Cup.

In Austria, Coach Tab Ramos’ team won its first game since qualifying in January with a 1-0 victory over Croatia. The Columbus Crew’s 20-year-old Romain Gall, co-leading scorer with five goals at the U-20 Concacaf Championship in January, scored two minutes after coming off the bench in the 64th minute.

Bradford Jamieson stayed with his Los Angeles Galaxy while the U-20s were in Austria. The 18-year-old got his second straight MLS start and scored his first MLS goal -- a “Goal of the Week” candidate in a 1-1 tie with the undefeated New York Red Bulls. Jamieson, whose two goals in U-20 qualifying included the strike in a crucial 1-0 win over Trinidad & Tobago, roasted two defenders before stroking home a left-footed shot from 13 yards out.

"Obviously it was a great goal,” said Galaxy coach Bruce Arena. “He's still a young kid, he had some good moments and some that weren't so good but overall a real good performance by a good young player."

Jamieson, who played for Chivas USA’s Development Academy team before moving across town to the Galaxy, spent last season with Galaxy II, scoring six goals and was a USL Rookie of the Year finalist.

Gall, who was born in Paris and moved to Virginia with his family at age 7, played for the academy programs at D.C. United and Real Salt Lake-Arizona. He spent two seasons in France with Lorient’s reserve team before landing in Columbus via MLS’s weighted lottery. Gall made three MLS appearances last season but has yet to see Crew action this season as he was sidelined with a knee injury.

Since qualifying and prior to the win over Croatia, Ramos’ team tied Qatar 2-2 tie and lost 2-1 to both Tottenham Hotspur and England’s U-21s.

Philadelphia Union midfielder Zach Pfeffer set up Gall’s goal against Croatia. Maki Tall, who plays for France’s Red Star, missed a penalty kick for the USA in the first half. 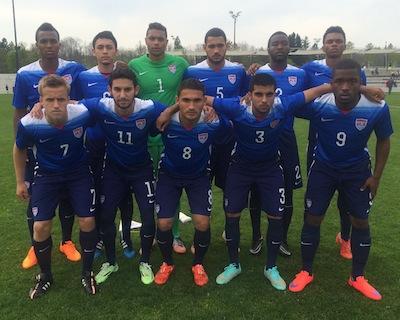 Jamieson was one of four U-20s who played in qualifying but skipped the Croatia game to play for their MLS teams.

New York Red Bull defender Matt Miazga played in last Tuesday’s tie with Qatar but returned from Austria to start against the Galaxy on Sunday. Since 29-year-old French defender Ronald Zubar was injured in the Red Bulls’ opener, Miazga has started all five games.

“As each game [passes], I feel more and more confident,” Miazga told MLSSoccer.com. “I feel that I can talk to the guys, even though I’m young, and I can try to show my leadership qualities every game. Now when I go to the Under-20s, they are going to be my age, and I really can be a leader there. Coach [Tab Ramos] can put his trust in me to perform and close out games.”

FC Dallas midfielder Kellyn Acosta, who captained the USA in qualifying before suffering a knee injury the second game, went the full 90 for the first time this season in Saturday’s 1-1 tie with Colorado.

Orlando City defender Tyler Turner, a Connecticut product, made his fourth appearance and second start of the season in a 2-0 loss to Toronto on Sunday.

The USA will face Myanmar, host New Zealand and Ukraine in group play at the 2015 U-20 World Cup May 30-June 20. Ramos must name his 21-player roster within three weeks.

Four young players have a go at 49ers owner Jed York to the tune of the old “Beverly Hillbillies” theme:

* Phil Wright, US Club Soccer’s Chairman of the Board of Directors since 2003, has been re-appointed to a two-year term. Last month, US Club Soccer members re-elected Mike Sweeney (Region II) and Tom Atencio (Region IV) and voted in newcomers Mike Cullina (Region I) and George Fotopoulos (Region III).

"This will be my final term as chairman, as I strongly believe new blood is always important to the long-term health of an organization," Wright said. "After this term, I intend to let the next generation of committed soccer professionals take the reins."