The Republican-dominated Florida Legislature found a way to burst the bubble on Orlando City's fairy-tale start to its MLS adventure. The House of Representatives adjourned three days early in a dispute with the Senate over Medicaid expansion, leaving $30 million in funding for Orlando City's new city-owned stadium in limbo.

Last year, the Florida Legislature approved funding for sports facilities in the form of state sales-tax rebates, making the Orlando City downtown stadium and other Florida sports facilities (arenas, stadiums and raceways) eligible for the money paid out in yearly rebates.

Leading the fight to vacate last year's legislature has been the budget chairman and speaker-designate Richard Corcoran, who opposes using public money to give rebates to "rich people."

"I don't understand how you can claim to have a fiscal crisis on health care," he said, "but can find millions of dollars in subsidies for billionaire sports owners."

The new Orlando City stadium wasn't the only victim of the impasse in Tallahassee. All other kinds of legislation died on the vine, including a key water legislation package and prison reform bill. 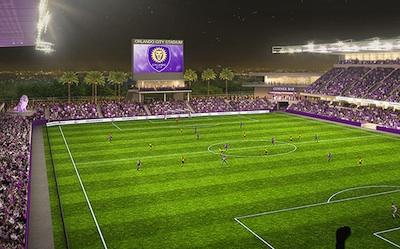 In the meantime, work has begun slowly on getting the site along Church Street ready for construction. The overall cost for the stadium that will initially seat 19,500 fans is $115 million. Orlando mayor Buddy Dyer has not commented since the legislature recessed but he did say last week that the money from the rebates was integral to the new stadium and there was no "Plan B."

Orlando station WFTV reported last week that the extra money would go toward expansion of the seating capacity to 25,000, construction of a roof over the north end of the stadium and extending over the east and west end stands, luxury suites, supporters pub and party terraces.

Orlando City is playing its first season at the Orlando Citrus Bowl, which was itself reconstructed to the tune of more than $200 million and reopened this year.

Orlando City sold out its opener against New York City FC with a crowd of 62,510 and has drawn more than 30,000 fans for each home game since then -- all losses -- to set an MLS record for the largest average attendance for a club's first four games.