The U.S. U-15 boys national team, coached by John Hackworth, won the Torneo Delle Nazioni with a 3-2 win over Austria on Friday. The Americans scored 15 goals in five games at the tourney hosted by Italy, Austria and Slovenia.

Here’s a look at the U.S. scorers:

Andrew Carleton (6 goals): The Georgia United striker scored twice in three wins: the final, and 6-2 and 4-1 wins over Croatia and Costa Rica in group play. Carleton has also played for Southern Soccer Academy and United Futbol Academy, with which he won the U-14 Golden Ball at the 2014 US Youth Soccer National Championships.

Ayomide Akinola (4 goals): The Michigan-born striker who plays for Toronto FC’s academy scored four goals in the win over Croatia.

George Acosta (1 goal): Scorer in the 3-2 group-stage loss against Slovenia, Acosta assisted on the USA’s opening goal in the final. The Florida product played for Weston FC’s Development Academy before moving to Argentina’s Estudiantes.

Tim Weah (1 goal): The son of former Liberian great George Weah, the 1995 World Player of the Year, scored the deciding goal in the final win over Austria. Now Paris Saint-Germain’s youth program, he played New York youth ball with BW Gottschee and the New York Red Bulls. Weah converted his spot kick in the sixth round of the tiebreaker after the USA’s scoreless semifinal against Italy. 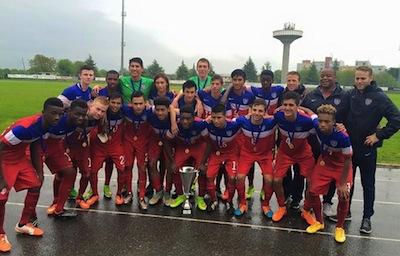 Coach Richie Williams has called in a 20-player squad for a May 2-11 camp at the New York Red Bulls' practice facility East Hanover, N.J., as preparations continue for the 2015 U-17 World Cup hosted by Chile in October.

Five of the players called in weren’t part of the squad that qualified with a third-place finish at the U-17 Concacaf Championship in March: Matt Constant, Logan Panchot, Terrell Lowe, Auston Trusty, George Braima.

In what will be considered a win for US Club Soccer in its turf war with US Youth Soccer, top youth clubs from the greater Houston, Austin and San Antonio areas will this fall begin competing under the US Club Soccer umbrella in the United Soccer Clubs (USC).

The USC Champions League will be the top level of competition in the league covering boys and girls, U-11 through U-18. Teams will compete for the opportunity to advance to US Club Soccer national championship events.

“When leaders from multiple clubs work together to change and improve the environment in which they compete, great things happen for the game,” US Club Soccer Executive Vice President Christian Lavers said in a press release. “The vision and leadership shown by the Directors of Coaching in southern Texas in creating this new platform will have a hugely positive impact on their players, teams and clubs.”

The team, which went undefeated in regulation time in seven games but was eliminated in spot-kick tiebreaker, was coached by Eastern New York’s Jose Luis Rebay and assisted by Vermont’s Craig Stone.

Vermont’s Francis Nardiello-Smith led the team with four goals. Its wins included a 1-0 victory over Hungary on a goal by Virginia’s Jack Ruddy. It beat eventual runner-up Genoa in a PK shootout thanks to three saves by Lorenzo Gordon of Virginia. Sampdoria won the tournament and Juventus finished third.

“We could not be more proud of this team both by their play on the field and how they represented us off the field,” said Keith Tabatznik, US Youth Soccer ODP Boys Region I Head Coach. “They played the 4-3-3 to perfection with excellent possession from the back and an increasing ability to create dangerous chances. … In the entire tournament (7 games) we allowed just 1 goal and that came off a free kick.”