When Christen Press went from daisy-picking to goal-scoring

When you see World Cup-bound Christen Press play -- like her golazo against France -- you'd imagine she was a child who embraced soccer and fell in love with the ball the first time she stepped on the field.

The real story is an example of how children explore the game on their own terms, and it will undoubtedly delight advocates of small-sided soccer.

Before the USA’s 3-0 win over Ireland, I asked Press my favorite question: “What’s your first soccer memory … your introduction to the sport?” 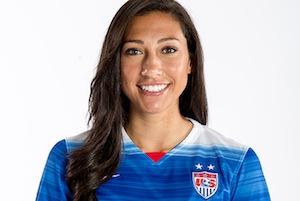 Press said: “I don’t remember. But I know the story.”

At around age 4, her parents signed her up for soccer:

“Apparently I played 11v11, full-field, one of like two girls on the field. It was pretty intense. Not your average rec league in Torrance [Calif.]. My mom says the entire season I just picked daises and made daisy chains.

“I did cartwheels. I waved. Toward the end of the season, she said, ‘Christen, why don’t you go to the ball?’

When the season ended, Stacy Press asked her daughter if she wanted to sign up for next season.

“And I said, no. We can do gymnastics or something else.”

Mom’s response was: “OK. Why don’t we try one more year? Then we can try other sports.”

Christen said, “OK, that’s fine. And then it was 7v7, all girls, small-field. I scored like eight goals in the first game.

Press won the 2010 Hermann Trophy while starring at Stanford. She has scored 20 goals in her first 43 games for the USA and is expected to play a key role for the USA’s attack at this summer’s Women’s World Cup.