USA gets its Arsenal kid

As U.S. coach Tab Ramos had hoped, FIFA cleared Arsenal's German-born Gedion Zelalem to play for the USA in time to include the 18-year-old midfielder on the U.S. roster for the U-20 World Cup that kicks off in New Zealand May 30.

Born to Ethiopian parents in Berlin, Zelalem moved to Maryland at age 9 before joining the Arsenal youth program shortly before his 16th birthday.

He became a U.S. citizen last December but U.S. Soccer had to appeal for his eligibility because of FIFA’s "five-year residency rule” designed to block national teams from fast-tracking the eligibility of foreign players. FIFA agreed with U.S. Soccer’s position that the rule should not apply to Zelalem because he moved with his family from Germany to Maryland as a child not for soccer reasons.

His Olney Rangers coach Matt Pilkington told us in January that, "He spent his formative years in U.S. and definitely has a strong connection. … He comes back whenever possible to be with friends and see club teammates." 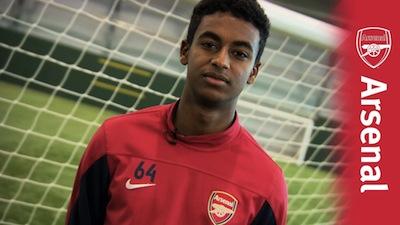 Arsenal coach Arsene Wenger, who has used Zelalem in two first-team games, said last year: "I honestly think Gedion has the talent to become a great player. … He is a creative player and he can create a spark, an opening with his passing, his vision through the lines.”

Olsen, who played youth ball at the Las Vegas Soccer Academy, was a red-shirt freshman at the University of San Diego in 2014 and earned WCC Freshman of the Year honors.

Pennsylvania product Zack Steffen, who played two seasons at the University of Maryland before signing for Germany’s Freiburg, was the starting keeper in qualifying play.

SHAQ SIGNS IN SPAIN. More than half of Ramos’ roster is based with foreign clubs, and that list now includes defender Shaquell Moore. The Georgia product, who has played for IMG Academy and FC Dallas Development Academy teams, has signed with Spanish third division club Huracan, which is vying second division promotion.

Moore had been training with Huracan between U-20 camps.

“I’ve spoken with their club director quite a few times,” Ramos said, “because I wanted to make sure he was getting playing time. When Shaq comes with us, he’s always physically in great shape. He brings a lot to the table for us in terms of covering space and getting up and down the line and making plays.” 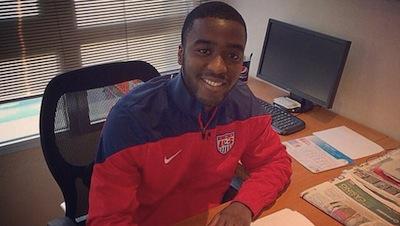 Former Man U player is National Boys Player of the Year

England native Jack Harrison, who played in Manchester United's youth program before arriving at the Berkshire School in Sheffield, Mass., was named the 2014-15 Gatorade National Boys Soccer Player of the Year -- the 30th player to win the award whose previous winners included several future pro stars, such as Claudio Reyna, Lee Nguyen and Alecko Eskandarian.

The 5-foot-10, 155-pound senior midfielder led the Berkshire Bears to a 19-2-1 record and a third straight New England Prep School Athletic Council Class A championship this past season. He scored 16 goals and made 27 assists. Harrison is headed to Wake Forest University.

Last year's winner, Ghana-born Abu Danladi who played four years of high school ball in Southern California after arriving in the USA via the Right to Dream program, tallied five goals and six assists during his freshman year at UCLA. 2013 winner Cristian Roldan has appeared in six games for MLS's Seattle Sounders after two seasons at the University of Washington.

Indeed, the Gatorade Player of the Year winners have a good track record of success at the higher levels. In addition to two-time World Cup captain Reyna, New England Revs star Nguyen and 2004 MLS Cup MVP Eskandarian, other notable winners include:

Chris Henderson, who after a long MLS career and is now Seattle Sounders' sporting director. Kyle Martino, who played for the Columbus Crew and LA Galaxy, is now an NBC Sports commentator. Lyle Yorks, who won two NCAA titles with Virginia and had a stint with D.C. United, is a player agent whose clients include top U.S. stars. 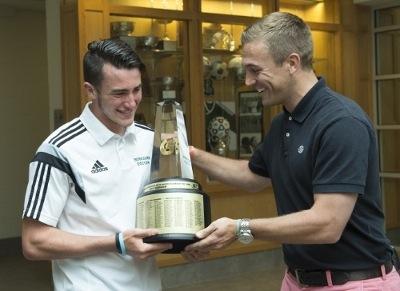