A convincing 2-0 victory in Vancouver propelled Seattle past D.C. United, New England and FC Dallas into first place of Soccer America's MLS Power Rankings. On a weekend when the winners were all lower-ranked teams, a dramatic win by Philadelphia was still not enough to get it out of the basement.

Only MLS results are counted in the Power Rankings. After the team’s current rank is its record in parentheses and ranking last week.

1. SEATTLE (6-3-1), 4. The Sounders concluded a tricky run of three straight road games by posting their first MLS victory at B.C. Place and jumped to the top of the Power Rankings by winning for the fifth time in the last seven. Chad Barrett didn’t get much notice last year, but he scored seven goals in just 867 minutes of play to match his career high; after bagging a pair in against the 'Caps he has 53 for his MLS career.

2. D.C UNITED (6-2-3), 1. Stunned by a stoppage-time goal in Philly, United saw its eight-game unbeaten streak ended. Twice in that span it beat OCSC, including a 2-1 victory Wednesday with a header by Kofi Opare and flying flick from substitute Chris Rolfe. In Philly, it probably deserved at least a point; Miguel Aguilar hit the post and had a goal disallowed for offside.

3. NEW ENGLAND (5-2-4), 2. Defender Jose Goncalves started his first game in more than a month and thus Jermaine Jones returned to midfield in a 1-1 tie with TFC. Goncalves volleyed against the post in the third minute and though the Revs put eight shots on goal only Juan Agudelo found the net. He scored on a cross from London Woodberry, whose work at right back is improving at an impressive rate. This week will test one of the league’s strongest squads; the Revs play at SKC Wednesday and host United Saturday.

4. FC DALLAS (6-2-3), 3. A minority share of possession (40.1 percent) and few clear chances yielded a 0-0 tie with the Red Bulls. FCD generated just three shots on goal and needed a vital block by defender Matt Hedges to get the point. After four straight appearances off the bench, Tesho Akindele got the start and played 59 minutes. FCD is unbeaten in its last five games but plays the next five on the road, starting Saturday at Montreal.

5. NY RED BULLS (4-1-5), 5. Several big defensive plays, including a Felipe clearance off the goal line and a crucial block by Kemar Lawrence, earned NYRB its first road shutout of the season, 0-0, at FCD. Felipe also got free enough times to take seven shots, five more than any teammate, as NYRB controlled 59.9 percent of the possession. A cagey approach away from home may not be glamorous but the Red Bulls are proving to be a tough team to beat.

6. SAN JOSE (5-4-2), 9. If he’s not yet the go-to guy in the Quakes lineup, Matias Perez Garcia is certainly a must-have. With Crew SC down to 10 men, he orchestrated both goals in a 2-0 victory by playing a ball wide that Jordan Stewart centered for Chris Wondolowski’s 99th career goal and then trading passes with Shea Salinas, who slammed home the clincher. Quakes are trending in the right direction: three wins and two ties in the last six games.

7. VANCOUVER (6-4-2), 6. The ‘Caps' statement game degenerated into a mumbled mess as the Sounders pounded out a 2-0 decision, Vancouver’s third loss in the last six matches and its first-ever home loss to Seattle in MLS play. Five of 16 shots were on frame but seldom were the ‘Caps forwards in threatening positions.

8. LA GALAXY (3-4-5), 7. The Galaxy had been getting results without playing very well and though due for a clunker, a 4-0 lashing by Orlando opened up a few wounds that have been slow to heal. Omar Gonzalez sat out with a knee ailment and Robbie Keane (groin injury) missed his seventh straight game. Centerbacks Leonardo and Tommy Meyer were breached repeatedly, Baggio Husidic showed why he’s not a left back, and starting forward Ignacio Maganto and Bradford Jamieson IV floundered. Head coach Bruce Arena labeled the performance “awful.” That it was.

9. COLUMBUS (4-4-2), 9. A bright start to the MLS tenure of Mohammed Saeid darkened in a 2-0 loss at San Jose. A pair of bad tackles and subsequent cards dismissed him and Crew SC couldn’t withstand its foe while playing a man down for nearly an hour. The red card ruined its hopes in this game, yet a record of 0-3-2 on the road is a signal a few things need to change.

10. SPORTING KC (3-2-5), 10. A rainout in Colorado should be a short-term benefit, as SKC hosts New England Wednesday and plays in Seattle Saturday. The rescheduled date has not been announced.

11. HOUSTON (4-4-4), 12. The Dynamo won a second straight game for the first time this season by brushing aside Portland, 3-1. Will Bruin, starting his sixth game of 11 appearances, scored twice in clinical fashion: with a solid header from a Brad Davis corner kick and confident lob after Jermaine Taylor’s long pass sent him clear. The defense did its job by limiting Portland to the one shot on goal with which it scored.

12. TORONTO FC (3-5-1), 13. Coming forward from deep positions is one of Michael Bradley’s greatest strengths, and by storming past several Revs he set himself up for a chance he drilled low inside the far post to earn a 1-1 tie. The result should add confidence in the TFC camp and set up a strong push, with five of the next six games at home. Jozy Altidore’s hamstring injury, which forced him off the field midway through the first half, is a concern with international callups coming soon.

13. REAL SALT LAKE (3-3-5), 11. RSL surrendered four goals in a game for the second time this season as Montreal won its first league game of 2015 emphatically, 4-1. RSL conceded three goals in a 12-minute interval and mustered only a goal by Devon Sandoval offensively. Nick Rimando’s second penalty-kick save in the last three games was the defensive highlight.

14. ORLANDO CITY (3-5-3), 14. After failing to win any of their first five home games the Lions hit an all cylinders to bash the Galaxy, 4-0, as a frenzied crowd of 40,122 roared its approval. Midfielders Darwin Ceren, Kaka and Eric Avila scored, as did No. 1 SuperDraft pick Cyle Larin, and Brek Shea played another solid game as his conversion to left mid continues. OCSC also held the Galaxy without a shot on goal until the 88th minute. On Wednesday, Larin scored in a 2-1 loss to D.C. United; he’s steadily advancing in Rookie of the Year consideration. 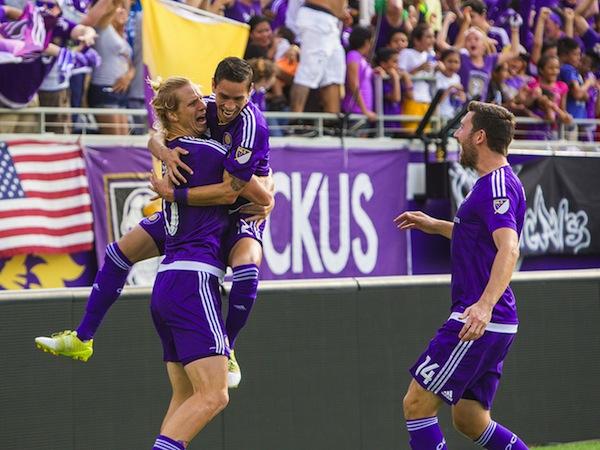 15.  PORTLAND (3-4-4), 15. The Timbers just can’t get on a good roll. They fell at Houston, 3-1, as Fanendo Adi scored with their only shot on goal and ended his six-game scoring drought. After tying their first three games, defeats have followed each of their three victories this season and it doesn’t seem to matter if they play home or away. In his second start of the season, Diego Valeri played 84 minutes and assisted on Adi’s goal. The Will Johnson Watch continues.

16. MONTREAL (1-3-2), 18. The Impact got off the winless schneid by humiliating RSL, 4-1. Two goals from Andres Romero blew the game open after Lauren Ciman had tapped home a poorly defended corner kick. Dilly Duka bagged the fourth goal. Head coach Frank Klopas served a one-game suspension handed down by MLS for marching onto the field and will return Saturday when Montreal hosts FC Dallas with another chance to prove it can hang against the better teams in MLS.

17. CHICAGO (3-5-1), 16. The Fire did everything a team is supposed to do against a shorthanded opponent except close the door, and squandered a 2-0 lead to end up tied with NYCFC, 2-2. Razvan Cocis, sidelined by a foot injury for the first seven games of the season, scored in his first start of 2015 and Jeff Larentowicz converted a penalty kick resulting from the foul and red card that reduced Chicago to 10 men. A chance missed by David Accam, whose run earned the penalty kick, proved to be costly.

18. COLORADO (2-7-1), 17. The Rapids sat out a storm delay of more than an hour before its game with SKC was postponed. No rescheduled date has been announced. A demanding packet of three games in eight days against the Northwest trio is up next: Saturday at home against Vancouver, next Wednesday in Seattle, and May 30 back home against Portland.

19. NEW YORK CITY FC (1-6-4), 19. Well, if you can’t win, rallying courageously while down a man to tie on the road in stoppage time is next-best, as NYCFC did in Chicago to snap a four-game losing streak. David Villa set up Khiry Sheldon’s equalizer to cap a comeback started when the rebound of his saved shot fell nicely for Mehdi Ballouchy to bang into the net. RJ Allen’s straight red card for a foul on David Accam dropped NYCFC into a deep hole from which rescue seemed impossible.

20. PHILADELPHIA (2-7-3), 20. Local product Zach Pfeffer’s strike in stoppage time lifted the mood at PPL Park, where a pre-game fan protest included a banner that read “Union Fans Deserve Better,” a rather mild proclamation of the obvious. Leave it to head coach Jim Curtin to tell it like it is: “We won a soccer game at home, that’s what you’re supposed to do.” Yet it was also a shutout – the loan of goalkeeper Bryan Sylvestre had been extended -- and a victory against a team that hadn’t lost in its last eight games. Not a big step forward but a good one.