Pro soccer is returning to Miami in 2016. And the team won't be operated by David Beckham's MLS group. Instead, another retired superstar, Italian Paolo Maldini, is setting stakes down in South Florida, where he has had a second home for 15 years, as the co-owner of the NASL's Miami FC with sports media mogul Riccardo Silva.

Silva's MP & Silva group will distribute Miami FC matches throughout the global market and be a shareholder of the newly formed Miami FC. Another investor will be Antonio Barreto, a Miami resident who will be CEO of Miami FC. 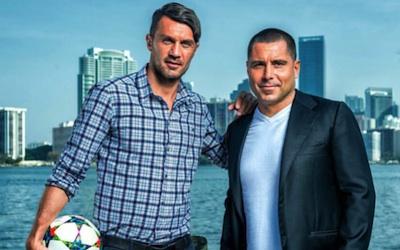 Before those matches are distributed, Maldini and Company will have to resolve the same issue plaguing Beckham's group, and that is finding a home. Miami FC's announcement referred to playing in "one of the existing world-class stadiums of Miami." Miami is home to Sun Life Stadium, where the Dolphins and University of Miami play football, Marlins Park, venue of the baseball Marlins, plus several smaller college football stadiums north of the city.

"I'm proud and excited to be part of this venture," said Maldini, who played 25 seasons with AC Milan before retiring in 2009 in a statement. "I strongly believe in the growth of soccer in the USA, and this is the perfect project to develop a top-class soccer team in one of the most important cities in the world. We are glad not only to bring a professional soccer team to Miami, but also to support all of its communities through our social responsibility commitment. We believe that the fast-growing NASL will be the perfect platform to develop a successful team and a valuable business. Miami has been my second home for 15 years, so I look forward to spending more and more time here as co-owner of Miami FC, giving my enthusiastic contribution for its success."

Miami will give the NASL 12 teams. Hartford and Hamilton, Ontario, have been mentioned as other possible expansion teams.

Player of the Week

Billy Forbes was named NASL Player of the Week after scoring a pair of second-half goals in the San Antonio Scorpions' 3-2 win over FC Edmonton on the road. The Turks & Caicos international picked the pocket of Eddies defender Mallan Roberts and coolly deposited a shot into the back of the net for the eventual game-winning goal in the 82nd minute.