The 'Relative Age Effect' -- a Response from U.S. Soccer

In his 2008 book "Outliers," Malcolm Gladwell popularized the concept of the relative age effect (RAE). He used Canadian hockey to demonstrate a bias in youth sports toward players born near the age cutoff date.

Subsequent research in youth soccer has provided examples in which a disproportionate number of players born earlier in the year (when the cutoff is Jan. 1) are chosen for youth national teams. A few months difference in age in young players can make significant difference in athletic ability, and the danger is that players who are physically less mature, yet possess great talent potential, will not get the benefits of the programs the slightly older players are selected for.

This month, U.S. Soccer is holding its inaugural Boys National Team Futures camp, for players born in 2000 and 2001. It is designed for players who “appear to be on a later physical development growth path and/or are born in the second half of the year, to reduce the impact of physical maturity and relative age effect on identification and evaluation of talent.”

A 58-player roster has been chosen to gather in Carson, Calif., for the first such camp, May 23-26 at the U.S. Soccer National Training Center. 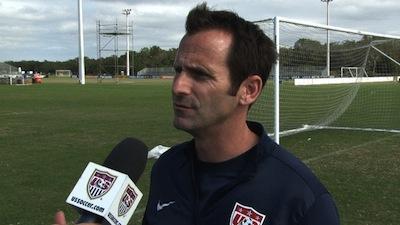 “We are scouting with a long-term objective by focusing our evaluation and selection on the qualities needed to become a national team player in the future,” U.S. Soccer Director of Scouting Tony Lepore said. “The Futures Camp recognizes that players in these younger age groups who can typically have the biggest impact and make a difference are the ones who are physically superior and more mature, but this doesn’t necessarily mean that they are the most talented. When scouting young players among the same age group, we see big differences in performance based on birth month and maturity. …

“There are so many examples of late mature players who have become the top players because they develop better skills, awareness, and insight into the game, rather than relying on advantages like size, strength, and power. The objective is to help make sure that we are not overlooking any players and more closely following the pathway of players who have the qualities to make a bigger impact later on, by age U-20 to U-23, when there is no longer any difference between early and late developers.”

U.S. Soccer says players at the camp will exposed "to hyper-focused curriculum formulated around highlighting each player's unique talents while challenging them to improve decision-making and speed of play, raise tactical awareness, and improve technical execution."

Gedion Zelalem made his first appearance in a U.S. uniform as a 59th minute sub and the U.S. U-20s beat Australia, 2-1, on Tuesday with goals by Joel Sonora – a long-range rocket – and Maki Tall in the 60th and 61st minutes.

Coach Tab Ramos’ squad arrived in Australia on Saturday for a six-day camp before departing for New Zealand, where it begins its U-20 World Cup campaign May 30 against Myanmar.

“I was happy attacking-wise,” Ramos said. “We created eight or nine very good chances to score in the first half. In the second half we scored a couple, which at the end of the day, that’s what’s important. We’re looking at the way the team functions and what combinations of players we can have on the field. So for the first day it was very good."