Women's World Cup all primed to be prime-time hit

You heard it here first: With a little luck, Fox will break the record for the most-viewed soccer game on U.S. television during its coverage of the Women's World Cup.

A little luck? A long and exciting run by the USA in Canada will do the trick.

The USA is better than it was three and four years ago, but many of its rivals, notably France, are better, too, so there is no guarantee how far the USA will go in the tournament.

An exciting run? No problem. The Americans were the drama queens of the 2011 Women's World Cup and 2012 London Olympics, playing three of the most thrilling women's matches ever played: the Brazil quarterfinal and Japan final in Germany and Canada semifinal at Old Trafford a year later. And USA-France in the 2011 semifinals wasn't bad, nor was the USA-Japan rematch in the Olympic gold-medal game at Wembley.

As a general rule, women's soccer struggles in comparison to the men's game in terms of the breadth of interest and support at the pro level. (Four of the nine WSL teams average less than 3,000 fans a game). But the U.S. women's national team is another thing.

The intense interest in the women was evident at the first of three send-off series matches, the USA-Ireland game played before a sellout crowd of 18,000 at San Jose's Avaya Stadium. The ticket prices were not cheap: $35-$280. Two hours after the game, most of the cars had emptied the stadium -- a not so insignificant feat -- but from the press box you could still hear the screeches from young fans. It was Mother's Day, and you'd have thought everyone would have headed off to celebrate the day. The U.S. team bus trying to get the women off to the airport for their flight back to Los Angeles was surrounded. A thousand fans were shouting in unison, "Abby! Abby!"

As Ann Killion of the San Francisco Chronicle wrote the next day, the U.S. women's national team is the mother of all women's sports teams. It's not just the most popular women's sports team, but its biggest stars -- players like Abby Wambach, Hope Solo and Alex Morgan -- are celebrities whose popularity transcends sports.

ESPN raised the bar high with its award-winning soccer coverage, but Fox Sports is pulling out all the promotional stops ahead of the first major tournament of its eight-year deal (recently extended to 12) with FIFA. It paid for the mothers of the U.S. women to fly in on the eve of the Ireland match and surprise their daughters for Mother's Day. On the walkway leading to Avaya Stadium flew flags of the 24 finalists, all decked out for what was just a tuneup game, a one-off event. If you looked closely, the flags contained the Fox Sports logo publicizing its Women's World Cup coverage. 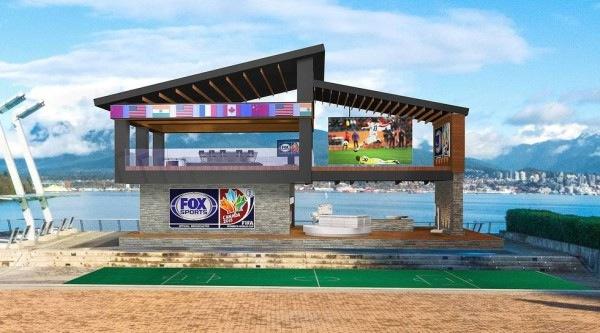 Fox Sports, which announced its broadcast schedule on Wednesday, is shelling out for a two-story studio at Coal Harbour in Vancouver. Remember "Last Call" from the ESPN studios at Rio de Janeiro's Clube dos Marimbas, the sailing club overlooking Copacabana Beach? I've been to Coal Harbour. And trust me. The view is just as picturesque as that of Copacabana Beach minus the beach-goers.

But what will work most in Fox Sports' favor will be the favorable time zones. ESPN had a little of that in Brazil last summer when it set a record for the most-viewed soccer match ever on U.S. television. USA-Portugal, which drew 18,220,000 viewers, kicked off at 6 p.m. ET.

Of the 52 Women's World Cup matches, 29 will kick off at or after 6 p.m. ET. No broadcaster has ever had so many prime-time opportunities to showcase its soccer coverage. Sixteen games will air on Fox, the most ever World Cup games (men or women) to air on network television. Everything is aligned for the 2015 Women's World Cup to be a prime-time hit on television.

Now if only Fox Sports gets a little luck on the field.