Three days. Not much time to soak in a city's soccer culture. But this is New York City. And it helps that I'm at the apartment of Soccer America columnist Paul Gardner. He started covering Big Apple sports in 1961, when he wrote about the Roger Maris-Mickey Mantle pursuit of Babe Ruth's 60-home run record for The Observer.

Gardner, who left his pharmacist career for reporting, was also a photojournalist during his early years in New York City. To rifle through his picture archives is a fascinating trip through much of the city’s rich soccer history.

The first photo that catches my eye shows how serious New Yorkers were about their soccer back in the 1960s. Cold weather? No problem. 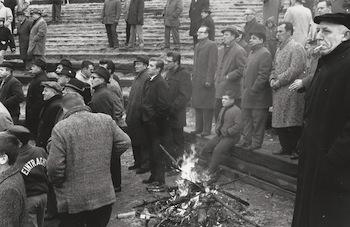 After a close look at the contact sheet, Gardner is pretty sure that’s not the Eintracht Oval, but the Metropolitan Oval, in Queens. German immigrants built the Met Oval in 1925 and it served as the center of ethnic soccer in New York City for decades. Here’s what it looked like in 1962:

In the late 1990s I went with Gardner to the Met Oval while he was writing another article to spread the word that the Met Oval needed help. Doom was near for the dilapidated dust bowl that owed more than $100,000 to New York City in real estate taxes. But local soccer leaders, led by Jim Vogt, formed a foundation, and funds from Nike and the U.S. Soccer Foundation helped save the Met Oval, which now hosts up to 20 games a week, on bright green artificial turf. 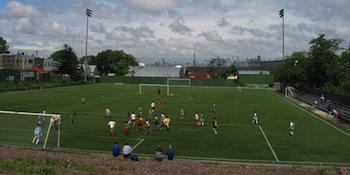 On previous visits to New York City, going to watch pro soccer meant leaving the boroughs for New Jersey -- to see the Red Bulls in Harrison, or before that, the MetroStars in East Rutherford. But this time, New York City really does have its own team, NYCFC, playing its first MLS season, in Yankee Stadium in the Bronx. 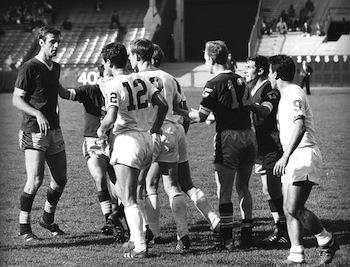 The new Yankee Stadium was completed in 2009, and stands one block north of the original. My expectations for a soccer game in a baseball stadium are low, but I like the convenient commute – by subway, the best way to get to a soccer game. The atmosphere builds as fans enter the trains, station after station. The 161st Street-Yankee Stadium station is right next to the stadium. A subway ticket costs $2.75.

NYCFC has won only once this season, its home opener that drew 43,507. A crowd of 23,315 shows for the Friday night game against the Chicago Fire, decreasing the average to 27,002 after the club’s first six games. Only nine of MLS’s 20 teams can boast a 20,000-plus average and the Friday night crowd fills most of the lower sections. The incongruous field configuration is a distraction that fades when the play begins and the fans start cheering.

The infield dirt that reaches the soccer field is seamlessly covered with portable grass. The fans, led by The Third Rail supporters, are boisterous, and unless you’ve got a low seat behind home plate -- Yankee Stadium is a more than adequate soccer venue. 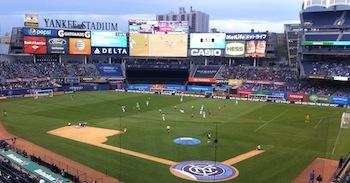 On the field, NYCFC doesn’t have nearly enough skill on the backline nor cohesion in the midfield to deliver jogo bonito. The home team goes two goals and one man down (red card to RJ Allen) within a half hour. But Yankee Stadium erupts in first-half stoppage time when Spanish World Cup-winner David Villa strikes a shot that keeper Sean Johnson can’t handle and Mehdi Ballouchy buries the rebound.

Such is the vigor of NYCFC’s second-half effort that “They should always play with 10” is the quip making the press-box rounds. Then sure enough, Villa sets up rookie Khiry Shelton to bury a 91st minute stoppage-time goal for a 2-2 tie that fans greet like a win. There’s singing on the subway back to the Upper West Side on Friday night. One imagines what the Yankee Stadium experience will be like if this team starts playing high quality soccer.

For Saturday, I’m looking for youth games. My first choice is BW Gottschee, the 64-year-old Queens club, but its Development Academy teams are playing away, at St. Joseph's College on Long Island. We hear that Manhattan SC PSG – which last year under Coach Wilson Egidio became the first New York City team to win a US Youth Soccer National Championship since 1985 -- is playing a U-18 State Cup game against Long Island’s Massapequa SC. And it’s at Randall’s Island, another part of New York City soccer lore. Its Downing Stadium, a WPA project finished in 1936, is where Pele debuted for the New York Cosmos in 1975. 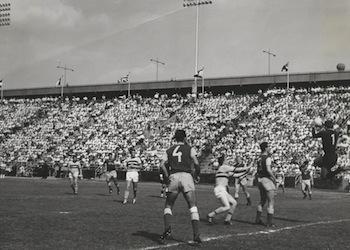 Downing Stadium got demolished in 2002 and has been replaced with Icahn Stadium, next to which is the field where Manhattan SC PSG beats Massapequa SC, 2-0, to advance to the State Cup final with some lively soccer from players that reflect the area’s diverse populace.

Sunday morning, we start at the Columbus Avenue farmers market before seeking some more soccer. Gardner points me toward the Hudson River. Joggers, cyclists, kids on scooters, casual walkers on the riverside path enjoy the perfectly warm weather – and I recall of the line from the Rex Stout book I read on the plane: “For if ever spring is spring, it is so in New York.”

I find the meadow with four mini-fields of 4v4 games between with 6- and 7-year-olds. 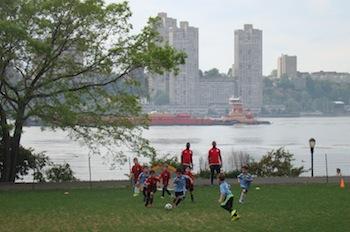 I sense this is a fine soccer environment for little ones because it takes me a long time to spot the coaches. I finally find them standing casually on the side, in Red Bull polo shirts. “We’re facilitators,” says Coach Angelo Jack, a Trinidadian who played for the Red Bulls U-23s. “Our job is to make sure the kids are having fun and the parents aren’t screaming at the kids.”