Teen star Mallory Pugh has her own unique style

At age 16, Mallory Pugh started all four U.S. games at the 2014 U-20 Women’s World Cup. So it’s little surprise that Pugh, as a high school junior, was named 2014-15 Gatorade National Girls Soccer Player of the Year.

Between this year’s U-20 national team camps – she’s eligible for the 2016 U-20 World Cup – Pugh managed to score had 24 goals and 12 assists for Mountain Vista High School in Highlands Ranch, Colo. She also scored 17 goals in 13 appearances for Real Colorado during the 2014-15 ECNL season.

"Mallory Pugh is an incredibly exciting player,” says Tony DiCicco, who coached the USA to titles at the 1996 Olympics, 1999 World Cup and 2008 U-20 World Cup. “I have tried to compare her to a Mia Hamm or Kristine Lilly or Tiffeny Milbrett when they were at that age, but the truth is she has her own unique style and way of beating defenders and carving up defenses. What a talent!" 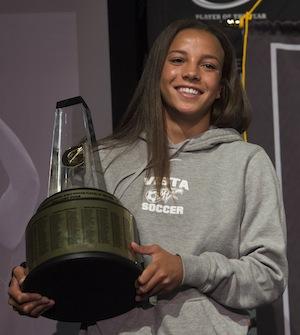 “There’s pressure there when you hear that, but that’s not my focus. Instead, I think about what motivates me: my love of the game and my love of playing the game.”

Pugh, who turned 17 last month, has verbally committed to UCLA for the fall of 2016.

“Over the last seven months, we studied creating various different partnerships that would have not only kept the academy teams intact, but expanded our involvement with youth player development in San Antonio,” the club announced in press release. “Unfortunately, we were unable to come to an agreement with the prospective partners. …

”The Scorpions recognize the vital importance of a strong youth soccer program in San Antonio and will continue to actively support youth soccer development throughout the city through our partnerships with numerous programs.”

The 32 qualifiers for the 2016-17 National League are expected to come from: