Aaron Davidson, one of the sports executives charged in the U.S. Department of Justice's probe into FIFA corruption and bribery, has been suspended by the NASL, which he served as board of governors chairman. Davidson is the president of Traffic Sports, which owns the NASL's Carolina RailHawks.

“In light of the ongoing investigation announced by the U.S. Department of Justice on Wednesday, the North American Soccer League's Board of Governors has suspended Chairperson Aaron Davidson, along with all business activities between the league and Traffic Sports, effective immediately. Commissioner Bill Peterson will serve as acting Chairperson.

“The Carolina RailHawks, the sole NASL club owned by Traffic Sports, will continue to operate in the ordinary course of business. The club's management team will continue to manage the day-to-day operations.”

The 12 charges faced by Davidson are: racketeering conspiracy, four counts of money laundering, six counts of wire fraud and obstruction of justice.

Player of the Week

Raul was named NASL Player of the Week after he scored from the penalty spot and assisted on Leo Fernandes’ goal in a 3-0 victory over the San Antonio Scorpions. The 37-year-old Spaniard has played in all eight Cosmos league games and has three goals.

The Fort Lauderdale Strikers will host Boca Juniors, currently tied for first in the Argentine league, in a July 1 friendly at Lockhart Stadium.

"This match is a great opportunity to be close to thousands of Boca’s fans in the United States and to prepare the team for the second part of the year,” Boca Juniors head coach Rodolfo Arruabarrena said in an NASL press release. “Boca is a very popular Argentine team, and we're very proud to play against a top-level club like Fort Lauderdale Strikers." 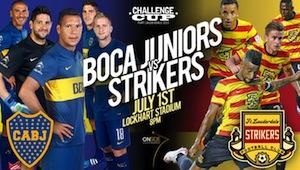 * The Cosmos’ friendly in Havana against Cuba will be televised live on June 2 at 5 pm ET by ONE World Sports, ESPN2, ESPN Deportes.

* Nicki Paterson's 88th-minute goal that earned Ottawa Fury FC a 1-0 win over Indy Eleven is NASL's Play of the Week.